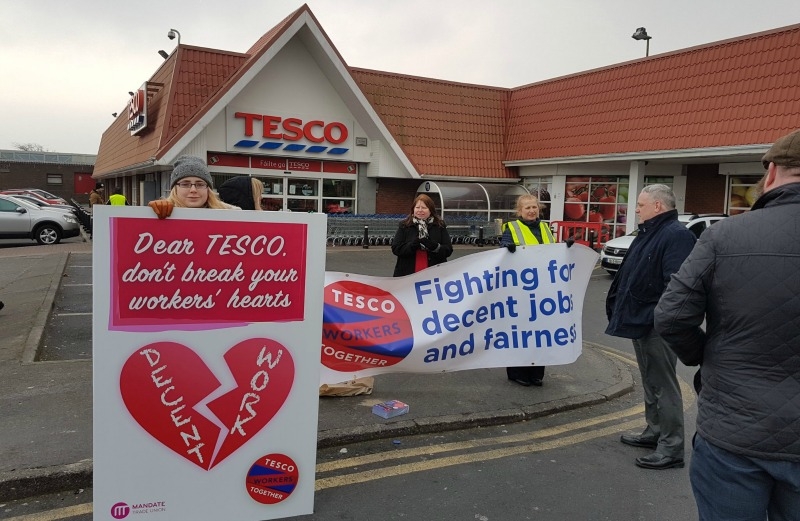 Strike action is taking place at eight Tesco stores across the country this morning, including the Ballyfermot store.

According to the Mandate Trade Union, Tesco Ireland are attempting to force changes to contracts of employment without agreement for approximately 250 workers employed before 1996.

@MandateTU Dropped by to support workers in Ballyfermot. Start of a long day for them. Give them your support pic.twitter.com/8NBGgTAFxW

Picket going strong at Tesco Ballyfermot this morning. Support the #TescoStrike & shop elsewhere until this dispute is resolved. pic.twitter.com/EiQOBqfEfQ

The new contracts would result in some workers experiencing reduced incomes of up to 15 percent along with increased ‘flexibility’.

Mandate say any attempts to change any workers’ conditions of employment without agreement will be resisted vigorously by their members.

The union say the company has never justified the cuts to their workers’ conditions of employment and Tesco’s actions are an abuse of power from a major multinational corporation against a small number of local workers who have given more than 20 years of loyal service.

Further strike action is set to take place over the coming days, while Tesco have said the stroes in question will remain open.

In statement released by the company said: Tesco is focused on continuing to serve its customers despite this unnecessary action by Mandate.”