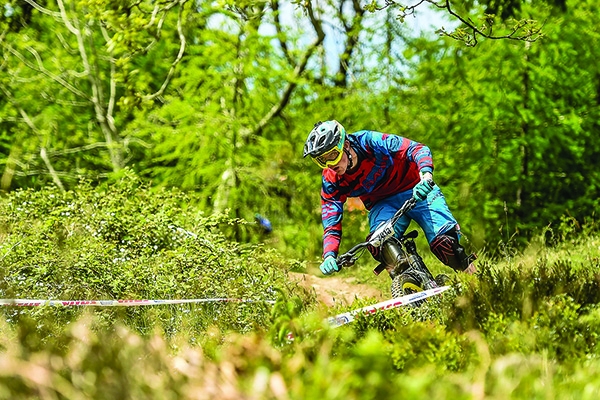 KILLIAN Callaghan underscored his reputation as one of the most promising competitors in international mountain bike racing after he finished second in the junior class at the first ever UEC European Enduro Championships in Austria.

The 17-year-old from Walkinstown was leading as he headed into the closing phase, but lost one place when forced to stop on the downhill stage as debris caught up in his gear mechanism.

Still finishing second to Austria’s Daniel Schemmel and ahead of Kevin Maderegger, also of the host nation, Callaghan emerged in 11th place overall, mixing with many of the Elite professional riders in action there.

“I was leading by one second coming into the last stage, but I lost a lot of time when some muck got stuck in the sprocket and I couldn’t move” recalled Callaghan “I managed to clear it out and pushed hard over the last stage but I finished second, nine seconds behind Daniel Schemmel.

“It was disappointing, getting stuck, but I was happy to have finished in second. I was surprised to finish second because I thought I had blown it. I thought I was way back.

“I did feel I could do well in this, a top-three finish maybe, so I was pleased with my performance.”

The Dubliner was greeted by thunderstorms on the lower part of the Alpine mountains, and, after travelling to the top by cable car, he found the weather even more treacherous.

With the first prologue planned to finish in the local town, the organ-isers were forced to cancel the stage due to the extreme weather.

Still Callaghan managed to post the second fastest times in the opening two stages, before going quickest in Stage Three and clocking the seventh fastest time of the overall entry.

In the final stage, which dropped almost 2000m from the snow-covered mountain top, Callaghan was forced to stop with mechanical trouble but still managed to secure a remarkable silver.

Delighted with the news, his sponsor and mentor Niall Davis said “Killian keeps shocking us with his results. “We’re so happy at Biking.ie that all his hard work is paying off for him”.

Callaghan will now turn his attention to a Super—Enduro outing in La Thuile, Italy which will help prepare him for the fourth round of the Enduro World Series in the French mountains of Samoens.