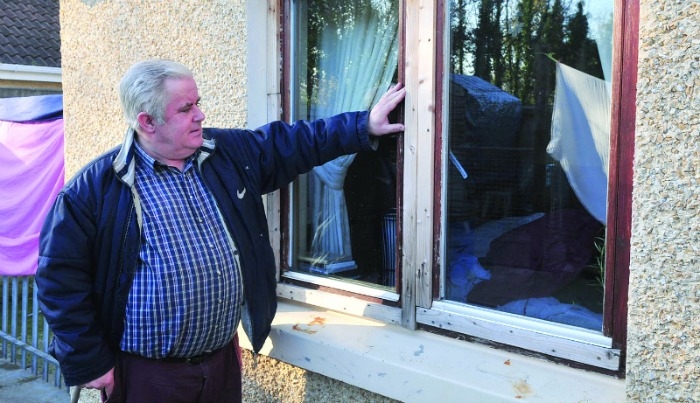 Tallaght family say they are being left to freeze

FAMILIES living on a Tallaght halting site have this week slammed South Dublin County Council for leaving them “freezing” in homes with broken and substandard windows and doors – which they also claim poses a serious risk in the event of fire.

This week, The Echo visited families living in Greenhills Grove, a five-bungalow site which lies off the Greenhills Road.

Just over five years ago, new families were moved onto the site, and at that time issues surrounding windows and doors were raised.

Gerry Wall and his wife Ann, whose 13-year-old son Tommy passed away in July following injuries he sustained in a car crash, live in the community with their two young sons, Jim and Gerry Jnr.

Gerry told The Echo: “We have always had problems with the windows and doors, they let the cold in and the heat out and when it rains, the water floods in under the door.

“It does be bitter in the houses even though we have the heating on all day, which is costing families a fortune in gas, which is a pay as you go system.

“Most of the radiators are under the windows as well, so the heat is just going out the windows.”

According to families, the wooden windows and doors also pose a serious health and safety risk – with some windows stuck and a number, dropping when opened.

Due to the risks posed, a number of windows have been nailed shut to avoid the framed glass falling out and injuring a child – a situation which puts residents at risk if they need to evacuate the houses in the event of a fire.

Resident Paddy Wall told The Echo: “I sealed one of my windows closed and I know this is not the option, but what could I do?

“I have little grandchildren in the house and I was so nervous that a window would fall out on top of them.

“We shouldn’t have been moved in here with the windows in this state.

“We don’t ask the council for anything, we pay good rent and we look after and maintain the site ourselves, but we feel forgotten about.

“We don’t hound the council for anything, but this situation with the windows has gotten too bad, something has to be done.”

Living across the street from Paddy, Alice Carmody said: “These windows should have been upgraded but the council just threw us in here despite there being so many problems.

“There’s kids in all of these houses and these windows are very dangerous, not to mention a fire hazard. We can’t get in or out some of the windows.

“This is a nice estate and we do everthing ourselves, but our homes are freezing, the attics are like an ice box. You could keep your frozen food up there and it wouldn’t go off, and the rain gets in through our front doors.

“We don’t want to be going to the papers, but we have asked the council for help so many times and nothing has happened.”

When contacted by The Echo, a spoksperson for South Dublin County Council said: “The council has not been made aware of general problems with the windows and doors in question.

“One window at this location was broken and our contractor has been asked to remedy it in the immediate future.

“A general inspection of the windows and doors will be undertaken in the coming days and any issues that are the responsibility of the council will be rectified.”