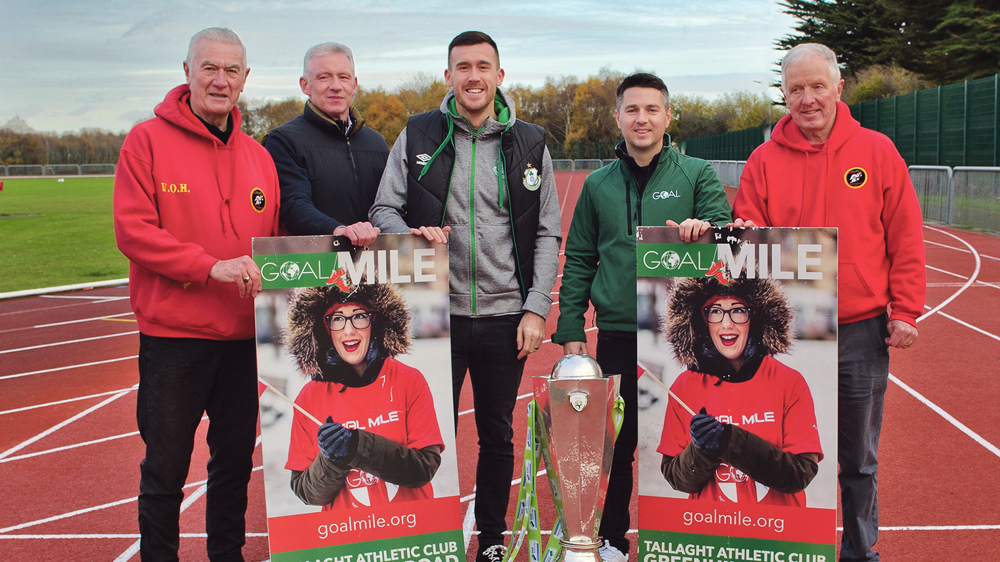 AFTER missing out last year due to the pandemic, the GOAL Mile returns on Christmas Day between 9.30am and 12 noon on Tallaght Athletic Track on Greenhills Road (beside Westpark Gym).

Every cent raised at the event will help GOAL in their fight against poverty. At the moment Goal has teams working in 13 countries, including Ethiopia, Syria and Sierra Leone.

goal has received tremendous support over the years from the people of Tallaght and surrounding areas who since 2003 have donated over €115,000 to the charity.

This year GOAL is delighted that our local team the League of Ireland Premier champion Shamrock Rovers have come on board to support their local mile.

The premier league trophy will be present on the track on Christmas morning as will some of the players.

“This is a great oppor-tunity to come along with your family run/walk a mile, donate whatever you wish to Goal and get your photos taken with the trophy,” Tallaght AC official John Cullen told The Echo.

There is no need to register just turn up between 9.30am and 12 noon If anybody would like a sponsorship card or more information about the event they can call into the Tallaght AC clubhouse or contact John on

087 6934309 Unfortunately this year it is not allowed to provide the customary cup of tea but hopefully all will be back to normal soon.

This is very much a fun morning so do come along and help some of the poorest people on the planet.