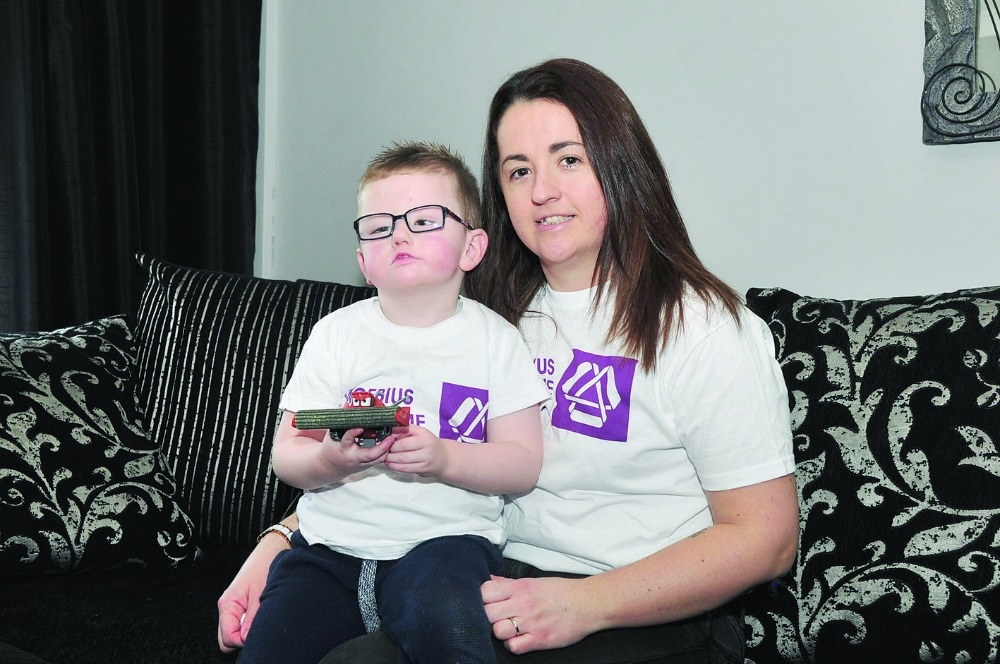 A TALLAGHT mother and her four-year-old son, who is one of six known children in Ireland living with a rare neurological condition, are behind a new national support group – which is staging an awareness day in The Louis Fitzgerald Hotel on Sunday, January 29.

Little Dexter Fennell was at 18 months diagnosed with Moebius syndrome, a rare condition that affects the muscles in the face and the muscle tone in the body and, for Dexter, living with the condition has affected his speech, eating, breathing and walking.

Due to its rarity and a lack of awareness of Moebius syndrome in Ireland, Dexter wasn’t diagnosed with the neurological condition until he was 18 months, a diagnoses which was reached after his mother Mags Purtill Fennell turned to the internet – and the family of a 16-year-old girl living in Killinarden who also has Mobius syndrome.

Mags, who lives in Brookfield, said: “Tegan Bracken O’ Reilly, a student of St Mark’s secondary school, is living with Moebius syndrome, and while she has no movement in her face and has endured years of physiotherapy and speech and language therapy, is not allowing the syndrome to limit what she can do – and is an inspiration to me and Dexter”.

She added: “Due to the lack of awareness across the medical sector in Ireland and in the general public, myself and Tegan’s mam Lesley decided to establish Mobius Syndrome Ireland – which alongside raising awareness, offers support and information to families.

“As far as we know there are six children and six adults with Mobius syndrome in Ireland, three of whom came forward after we held our first awareness event last January.

“The day was such a success and gave families the opportunity to come together in support, offer each other advice and compare notes on different aspects of the syndrome they have experienced with their child or loved one.

“Through the group we also want to raise awareness of Mobius syndrome and try and lobby for money to be invested into research, because as far as I know there are no studies into it at the moment.”

She added: “Dexter is starting primary school in Killinarden next September and I know he will struggle with that, as he can’t do the things that other kids can.

“However, he deserves the chance to go to school and I’m hoping that he will be given the supports that he needs and be assigned a SNA.

“From looking at Tegan and how well she has done at school, I know Dexter can achieve… he just needs a little bit of support and understanding.”

Mobius Syndrome Ireland will stage its free event in the Louis Fitzgerald Hotel on Sunday, January 29.