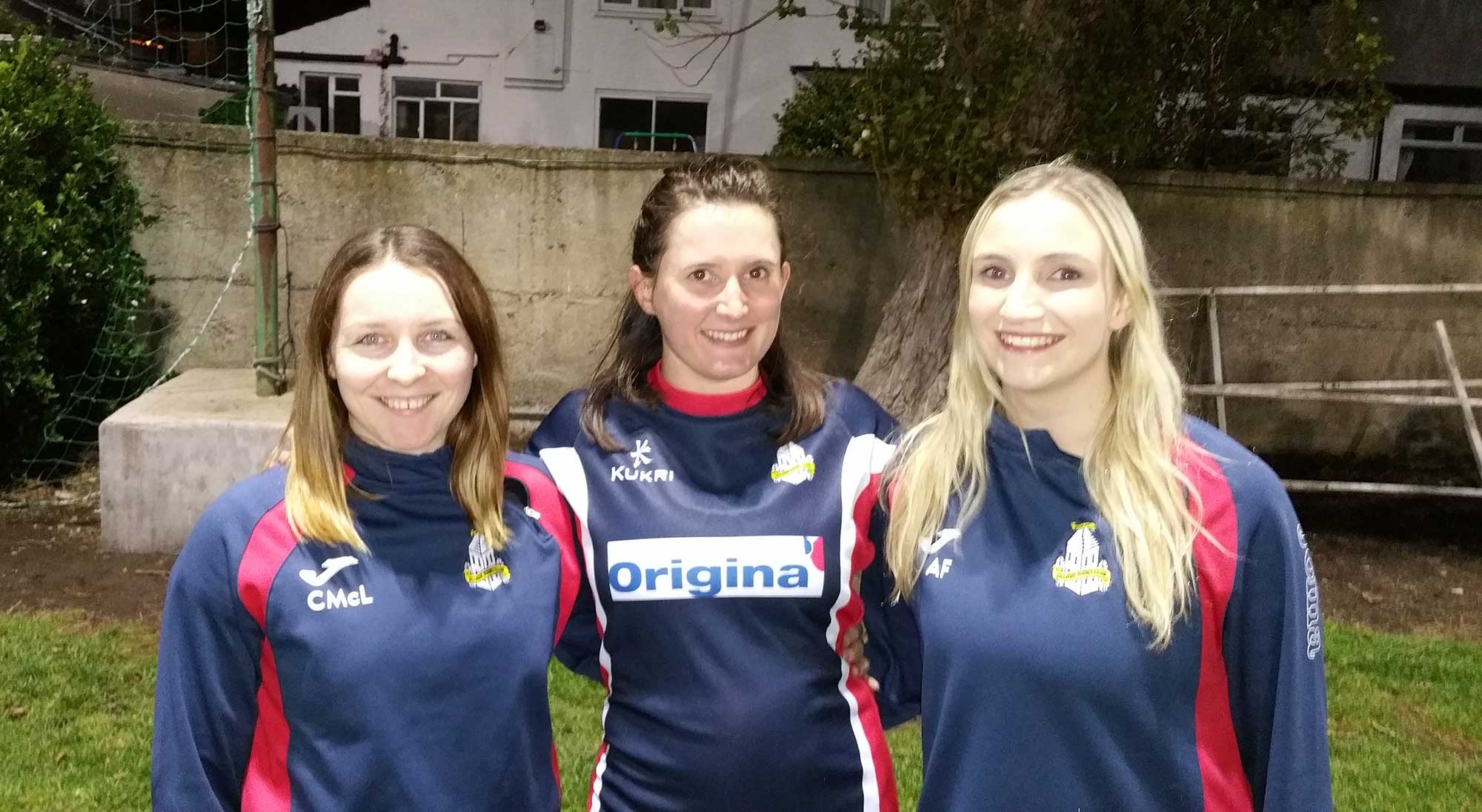 The Tallaght RFC women's team have started the season with two great wins.  However, they're always looking for new players to build their squad.

We talked to three of the team, centre Ciara McLoughlin, full back Megan Fogarty and second row Audrey Fulham, who have all only taken up the game in the last year.

We asked them about their experiences playing rugby for Tallaght RFC.

Before joining Tallaght RFC had you played rugby or any team sports before?

Cíara McLoughlin: I had never played rugby or any team sport before. It was something I used to regret; not getting involved with a sport when I was younger. So with joining Tallaght RFC at 26, it shows it's never too late to start!

Megan Fogarty: Before coming to Tallaght RFC the only experience I had with rugby, or any team sport, was tag rugby.

Audrey Fulham: Before joining I had only played tag rugby with the Unicorns (the greatest tag rugby team of all time!).

How did you come to join the Tallaght RFC Women’s team?

CM: I have friends on the men’s team who asked myself and few of my girl friends to play in the summer tag league. I had a lot of fun and met some of the girls on the women’s team! I never even knew there was a Tallaght women’s team so I decided to give it a go and ended up loving it!

MF: While playing tag, girls from the Women’s team approached us and asked us to come up to pre-season training, which we did for a few weeks. Initially I didn’t stick it out, I was also training in kickboxing at the time and the training clashed. But after watching a few matches and going to The Old Mill with the girls I ended up going back. I am really glad I did, as not sticking to a sport when I was younger is something I regretted.

AF: A few of the girls on the Unicorns team were approached by members of the TRFC Womens team after the tag season ended and asked if we’d come up for pre-season. I immediately loved it and have stayed now for my second season.

How did you take to the sport and what were the biggest challenges?

CM: I took to it well. I always loved watching rugby so had a good idea of the game. The biggest challenge was getting over the fear of tackling. Our coach teaches us how to properly tackle to avoid injury. Now there’s no better feeling then getting a good hit in! It is also a great stress reliever.

MF: I didn’t watch much rugby and I’m not that big into sports so coming into it I hadn’t really got a clue, but was eager to learn. I had a good base of fitness to work from which helped, but everything else was new to me, like how to tackle safely, and pretty much all the rules of the game!

AF: I took to the sport very well I think because I watch a lot of rugby and my boyfriend Andy plays for the men’s team so he was good at motivating me and giving me tips.

What are the most enjoyable aspects of playing with Tallaght?

CM: For me it’s learning and playing a sport I love with my friends. I enjoy going training on Monday and Wednesday evenings because you work hard building your skills and fitness but always have a laugh! And also the post match drinks in The Old Mill. When we win, first round is on the coach!

MF: I love the social aspect of playing with Tallaght. They are a great bunch of girls and I have made so many new friends from it . I also like the idea of playing for Tallaght as I’ve grown up here and don’t think I could play for any other team.

AF: I love the feeling of community. It’s a developing team/club and it feels nice to promote it as a life-long native of Tallaght.

Would you recommend other women to take up rugby and what are the benefits?

CM: I would highly recommend other women to take up rugby! You work hard and get fit while having fun! You get to meet new people and make new friends.

MF: I would definitely recommend other women to take up the sport, it’s great fun and a really good workout. It’s also a great outlet for any stress and a brilliant place to make some friends for life. It’s a sport that challenges you in so many ways and helps you grow and develop as a person both on and off the pitch.

AF: Definitely! It’s the best thing I’ve ever done in terms of my health – both physical and mental. I have never felt fitter, I’ve lost weight and toned up in the year I’ve been playing. I’ve made a tonne of friends for life and look forward to welcoming more girls to the club and making it enjoyable for them.

CM: One of the best decisions I’ve made was joining Tallaght rugby club! It is like been part of a family. I’ve made loads of new friends and there is a great camaraderie and banter within the club. Both the men’s and women’s teams support one another and win or lose there is always a few drinks afterwards. Since joining Tallaght RFC my weekends have been full of rugby and socialising with the club, and I wouldn’t change it.

MF: I would just like to say that it doesn’t matter what age or fitness level you are, everyone is welcome on the team.  Last year when I joined I found everyone so helpful and encouraging that even your knowledge of the sport doesn’t matter!

AF: There is a lot of love between the men’s and women’s team in relation to supporting each other at matches. It’s always great to look on the sidelines during a womens match and see the lads cheering us on and providing feedback on our play (when we ask for it). I personally never miss a men’s match. I think it’s important to support each other and then when we all go to the Mill for some drinks after, it definitely makes being a part of the club that bit more fun!

Cíara, Megan and Audrey all took up the game in their twenties but the great news for younger girls reading this is they can start playing now if they’re interested.

Girls aged 5 up to 12 years of age play together with the boys. The youths train at on Sundays beside Firhouse Community College with training starting at 10AM for the minis aged under-10s and then 10.30 for all other youths.

From age 12 onwards the girls play separately from the boys. The Tallaght teams for over 12’s are the Under 16’s and the Under 18’s Bisto’s ladies.

The Bisto’s are named after the late great Philip “Bisto” Preston and they are a group of girls made from mostly Tallaght, St. Marys and Old Belvedere.

The older girls on the team all have the option to train in Tallaght with the seniors on a Monday and Wednesday or in Old Belvedere on a Tuesday and Thursday. Then there is dedicated training for the Bisto’s at St Marys on a Friday evening at 6.30 and games are played on a Saturday.  For anyone who is interested, you can contact youths coach Audrey Fanning at 085 7349255.

For the senior women’s team Training is on Monday and Wednesday at 7PM in the pitch opposite Firhouse Community school. For more information you can contact the Women’s development officer Aoife Davoren at tallaghtrfcwdo@gmail.com.

Being part of Tallaght rugby club is about far more than just playing a sport.  It’s about improving your fitness, expanding your social life and making friends with people in your community you would likely never have met otherwise.

If this sounds interesting to you, come up to training and give it a try.  Regardless of your fitness or experience, you’ll be guaranteed a warm welcome from the Tallaght women’s team.”