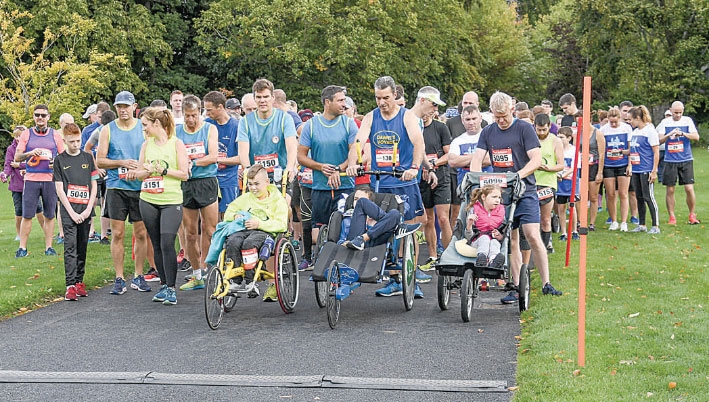 NEARLY €6,000 was raised by Team James for Barretstown in their inaugural fun run in Corkagh Park on Sunday. There were two races a 5km and 2km with over 400 people taking part.

As Team James is all about inclusion in sport, the race was led off by three assisted athletes, James Casserly, Daniel Tighe and Aoibhinn Breslin.

Vicki Casserly, James’ mother, told The Echo; “We were thrilled with the turnout. We think we have raised in excess of €5,500. We had over 400 runners. The weather turned out ok too. We used the Corkagh Park parkrun route.

“Our three assisted athletes, James, Daniel and Aoibhinn led out the runners. That was very important as we want to promote inclusion. It is also Health and Wellbeing Week so we wanted to get the message out.”

Vicki’s son James had planned to do the race in his handchair but he injured his leg a few weeks ago so he did the run in his wheelchair, pushed by his father, Dan. He also did the 2km run and ran the last 50 metres unassisted.

Vicki said she would like the run to become a yearly event but it is too early to say at the moment. She was thrilled that Frank Greally from The Irish Runner and Jim Aughney from the Dublin City Marathon were in attendance.

She added: “To everyone who helped through sponsorship of the event to providing goodies for the day, registrations, marshalling, advertising and everything in between, including Gardai, colleagues, friends from South Dublin County Council, Park Rangers, Lap Last Cafe, the wonderful Frank Greally and Jim Aughney, thank you.”

Vicki also thanked the organising committee, Keith Nolan, her sisters Alison and Jenny Casserly, Kenneth Egan, Emer Higgins, Gabriel Byrne, Tom Casserly and not forgetting Frances Alina who helped with our little ones, “but most importantly My better half Dan and Jimbo who led us out on a very fun day.”