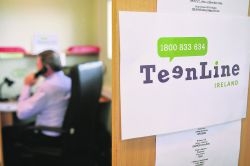 TeenLine board resigns over disagreements on direction

THE board of Tallaght-based listening service TeenLine has resigned following disagree-ments on the direction of the charity, The Echo has learned.

Established by Tallaght mother Maureen Bolger, after her son Darren tragically lost his life to suicide in 2003, TeenLine is a national listening and text service for teenagers in distress – and in 2014, received 19,036 calls.

Despite the board’s resignation, TeenLine is operating as normal – with volunteers on hand to respond to phone calls and texts.

The helpline and text service will continue to operate seven days a week from 8pm to 11pm, alongside its extended service from 4pm to 11pm every Wednesday.

Last year, the HSE’s National Office for Suicide Prevention (NOSP) formally notified TeenLine that it would not be providing further funding to the free phone helpline – a decision which prompted many campaigners and politicians to seek a reversal on the decision.

One of the reasons cited for the funding cut was TeenLine’s governance, with the recent resignation of the board not expected to assist the charity in its appeal for funding.

However, despite the funding cut, TeenLine has continued to develop over the past 12 months – including a rebrand of the service’s image, a new fundraising committee and the introduction of a free text number, which complements the Freephone number.

The service also recorded a 49 per cent increase in phone calls in 2014, with the text service encouraging more young males to reach out.

AN EGM (Emergency General Meeting) will take place on August 11 at 10.30am in the TeenLine offices at the Dominic’s Shopping Centre, Tallaght. The meeting is open to the public.