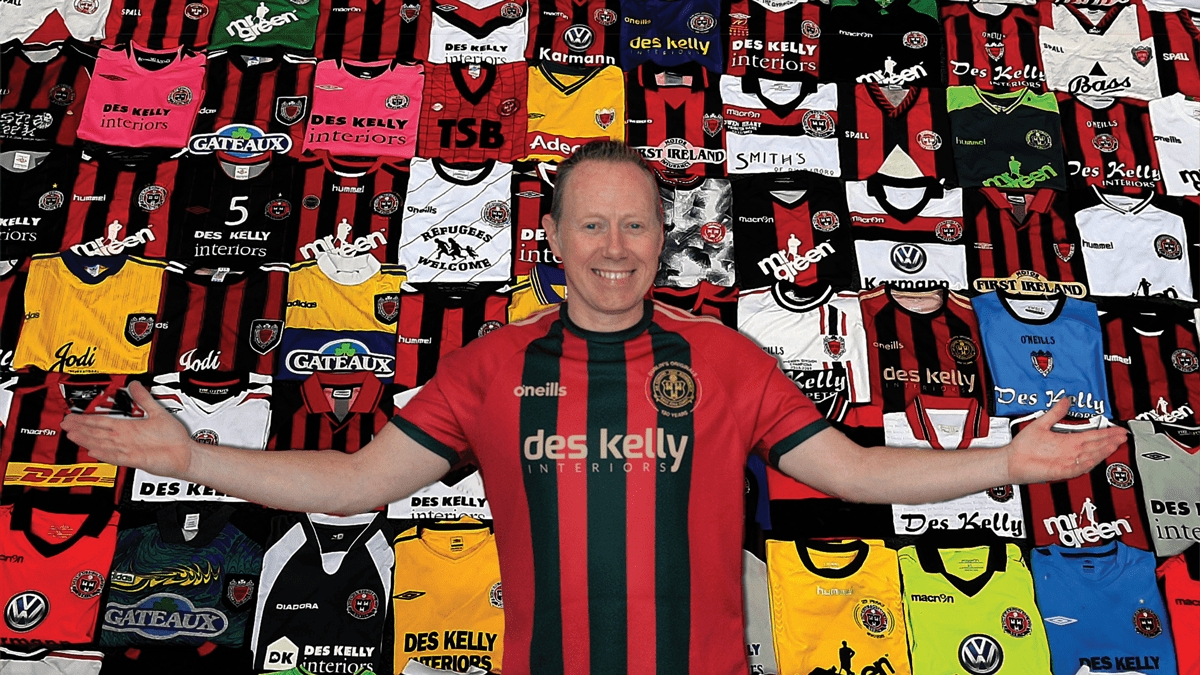 The Collectors: ‘Jersey nerd’ Keith has a different football top for every day of the year

A self-confessed “jersey nerd” Keith has a collection big enough that allows him to wear a different football top every day of the year.

Approximately half the collection represents his beloved Bohemian FC, with the remainder a mix of Hibernian FC, Manchester United, Republic of Ireland and continental European club tops.

Outside of his job working logistics for Baileys, Keith can always be found wearing a football top.

While abroad on holidays (pre-Covid 19) he likens it to being an unofficial ambassador for the club and the League of Ireland, as it often sparks conversations with football fans from other countries.

“I think I was a collector before I even realised I was, casually keeping shirts that I bought without the initial intention of hoarding/collecting. Some of my oldest shirts didn’t quite survive for various reasons, including ending up as household rags for my mother,” said Keith.

“My father Jimmy Murphy collected loads of things like mirrors, picture postcards, cigarette cards, some great stuff. I thought I was going to get that in the will but he sold the whole lot.”

A married father of three kids, Keith has been collecting tops since getting hands on a Sharp sponsored Man Utd jersey in the mid-1980s, but the main issue at this stage is finding space at home.

“I kind of pulled back because it was getting ridiculous. My wife Audrey is pretty cool about it, although she might not be cool about the space, but there are worse vices.

“I’m delighted my son Cillian (14) is a Bohs fan and into this as well, he wasn’t forced into it, I swear. My kids, including Amber (10) and Larissa (8), usually get an ‘oh, what shirt do we have on tonight then?’ at each training session up at Lucan Sarsfields.”

Keith is a proverbial connoisseur of his hobby, and even writes about jerseys in the Bohemian matchday programmes.

“It’s called ‘The Strip Club’ which looks at various shirts that we’ve worn over the years as well as our new ones. It’s something I love, I’ve been doing it for approximately five seasons now and it’s been very well received.”

In the FAI Cup final 1982, Bohemians wore a hooped jersey and left a continental collection

Rare and unique jerseys are among the most desirable for Keith.

“It’s only in the last 30 odd years that this really kicked off. Wearing a jersey wasn’t a done thing in the 80s. If you look at matches back then, fans are wearing scarves maybe. That’s why I stopped buying jerseys lately because it is limitless.”

Despite his newfound discipline with regard to adding to the collection, Keith always has an eye on something special.

Amber, Cillian and Larissa show off some of the Bohs collection

“If you had a Danish Dynamite jersey from the 80s, that could fetch between €500 to €600. Coventry City had a brown jersey back then that was one of the worst jerseys but the most sought after. There was no market back then, those jerseys would be the ultimate.”

The ‘holy grail of Bohs jerseys’ for Keith, is surprisingly not one from a bygone era, or a trophy winning season, but a very limited edition ‘Bob Marley’ away shirt, launched last season.

“Alas, the Bob Marley foundation put a stop to the mass production of this shirt. It transpires that there were only two shirts produced, both of which are in the hands of board members,” said Keith.

“One of my most treasured shirts is a match worn jersey from one of my all-time Bohemian heroes, Kevin Hunt.  He was our inspirational captain in the early noughties, who led by example.

“I love nothing better than to browse through some of the football shirt books that I have. They inspire me, but they also frighten me that there is no end to a football collection, just don’t tell my wife.”

While he has most of the Bohs jerseys produced over the past 25 years, pre-90s are harder to source, and often the only jerseys available were the ones worn on the pitch by players at LOI clubs.

Keith is always on the hunt for old Bohs shirts and can be contacted via Facebook.