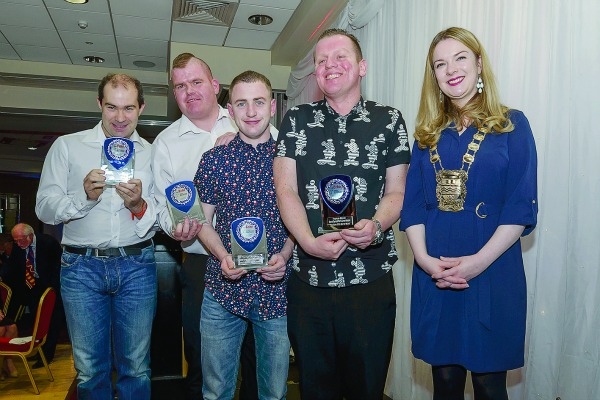 ONE of the highlights of The Echo 2015 Sports Awards Gala Night was the special tribute paid to some of our local Special Olympians who medalled at the World Games in Los Angeles in the summer.

Some eight athletes attended the function and among them was Michelle Stynes who, along with her Palmerstown Wildcats team mate Sarah Byrne, won gold with the Ireland Women’s Basketball team.

In men’s 11-a-side soccer, Team Ireland finished on a high by pipping Iceland 5-4 on penalties at the Drake Stadium in UCLA to secure bronze behind winners Great Britain and second place Bangladesh.

It was a great achievement for the team which included four Cheeverstown House Special Olympics Club members in Francis Bilardi and Mark Duffy from Tallaght, Ballyfermot’s Thomas Caulfield and Lucan’s David Carrig.

Keith Butler from Limekiln and Kilnamanagh’s Gary McEnroe both did Ireland proud in swimming.
The former took gold in the 800m Freestyle after clocking a great time of 12:07.62 before he secured a fifth place ribbon in the 1500m Open Water Swim.

Meanwhile McEnroe helped make it a great start to the World Games for Ireland when he took bronze in the 25m Backstroke after which he finished fifth in the 50m Freestyle and 4x25m Freestyle Relay.

Elizabeth Mair from Rathfarnham was one of the star performers in the Equestrian field for Ireland, going top of the podium in the Working Trails discipline.

This followed up on the gold medal win in English Equitation for the Festina Lente Special Olympics Club member a couple of days beforehand.