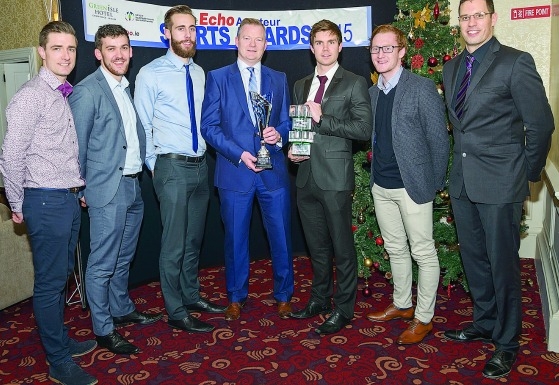 It capped a great year for the team which had despatched some of the strongly-tipped forces en route to only their third ever Dublin title before they successfully negotiated three more hurdles on their way to provincial glory.

The Firhouse Road club then surmounted the challenge of St Patrick’s of Louth, St Loman’s of Westmeath and finally seven-time Leinster Champions Portlaoise in the provincial decider.

More success followed later that week when this Ballyboden outfit was declared The Echo 2015 Team of the Year and there to receive the award for them on the night was captain Darragh Nelson.

“It was just fantastic to pick up the award on the night” he said afterwards.

“When you put so much effort in and then you win, it’s great to get recognised for it and we’re just delighted with the recognition that we’ve had from The Echo with this ‘Team of the Year’ Award. It just adds to it all.

“The last few years we’ve been knocking on the door. We lost to Vincent’s twice in the semi finals in the last two years and they obviously went on to win the All-Ireland so we knew we were close.

“The hunger that brought has really propelled us.

“When you beat some of the big teams you deserve your success and that’s what we did this season.

“Some people didn’t expect us to do so well, but beating some of the big teams brought us closer and then to win Leinster was just unbelievable. It was a great boost for the club” he added.

And while they have achieved so much over the past few months, these Ballyboden players will be hoping that the adventure continues in the new year.

Indeed they will soon be gearing up for their date with Clonmel Commericals in the All-Ireland Club Champion-ship semi finals on February 13 hoping to reach the St Patrick’s Day decider.

And Nelson believes that the cohesion that his team enjoys and which has strengthened over the past few months as they broke new ground for the club will go a long way to helping them achieve their ultimate goal.

“I think that when a team is successful it does bring you closer together and that will hopefully stand to us next year as we try to go all the way. It’ll make us believe” he maintained.