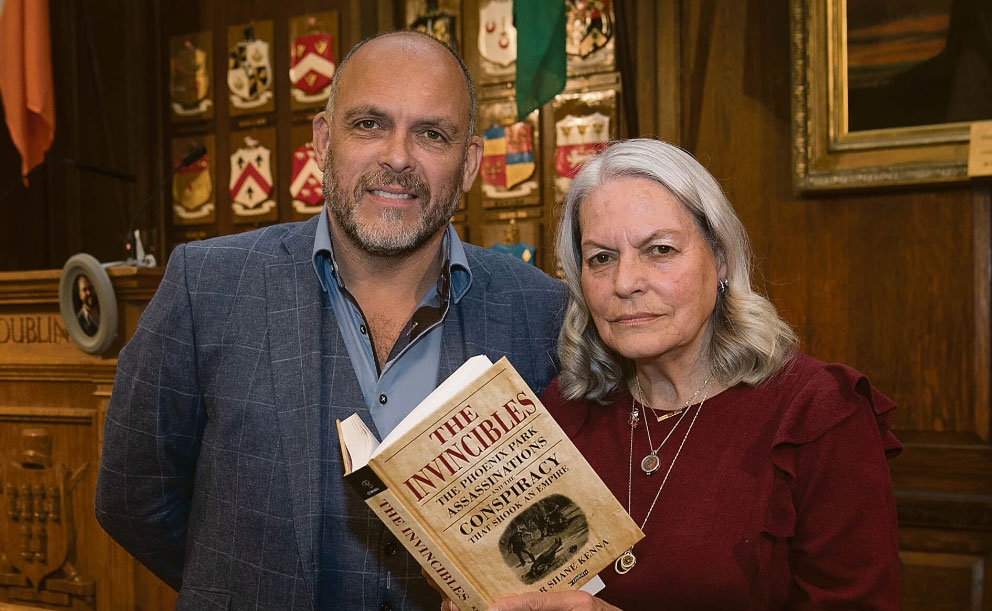 The Invincibles – Family of late historian celebrate his life with book

A host of family and friends of the late historian Dr Shane Kenna gathered in the Oak Room in the Mansion House recently to celebrate his life at the posthumous launch of his book on ‘The Invincibles: The Phoenix Park Assassinations and the Conspiracy that Shook an Empire’.

The Tallaght native who sadly passed away two years ago due to illness at just 33 years of age, was born and reared on Seskin View Road.

He had written a number of other books prior to this latest one, such as the  acclaimed biographies on Thomas MacDonagh and Jeremiah O’ Donovan Rossa, and also had stints as a tour guide in Kilmainham Jail and Dublin Castle.

As the publishers’ description of the book states, it focuses on a secret inner circle ‘assassination squad’ within the Irish Republican Brotherhood setup with the mission of striking at the heart of British Imperial Power by murdering the figureheads of Ireland’s oppressors.

And so it was that on May 6th 1882, as Permanent Under Secretary Thomas Henry Burke and Chief Secretary for Ireland Frederick Cavendish walked through the Phoenix Park, they were attacked by a four-man Fenian hit squad.

Speaking at the launch the late historians Mother Olive told The Echo, “We are here in the Mansion House today to launch my dear son’s book, ‘The Invincibles’.

“We found this book completed on his laptop, my son John brought it to the publishers, and this is why we are here today.”

Lord Mayor Cllr Niall Ring who hosted the launch remarked, “I was previously at some of the talks Shane gave, and his ability to transport you back and make you feel you were actually there, was amazing.”

Also speaking from the podium was Lorcan Collins the writer and historian from Templeogue.

He spoke of the great friendship he and the late Dr Kenna had, adding, “I was thinking about Shane and how long people would say his name for? R.R Madden is a man who wrote a number of books on the United Irishmen, he died 130 years ago and here we are still mentioning his name.”

Michael O’ Brien speaking on behalf of the publishers, said the last time he spoke to Dr. Kenna before he passed away was about his proposed book on The Invincibles.

Last to speak was the late authors brother John.

He began by stating his belief that History needed to be reinstated as a core subject for The Junior Certificate.

After thanking everyone who was there, he recalled ringing Michael O’ Brien, telling him he had “found a manuscript on Shane’s laptop, it was about the Invincibles, and would you like to publish it?” The Editor of O’ Brien Press replied that “such was the passion Shane showed in his work he couldn’t wait to get his hands on it.”