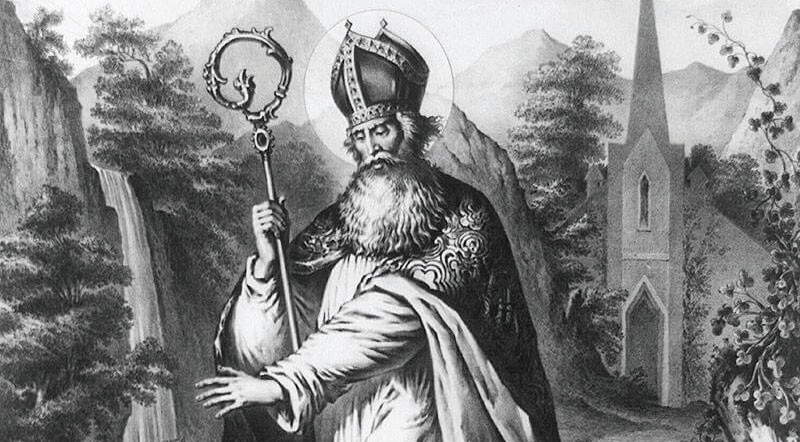 Rewind – The legend of St. Patrick

For this week’s piece I won’t be getting on any buses, instead I’ll be staying put in Clondalkin, and while this weeks’ subject, St. Patrick went in search of snakes to banish, I’ll be wandering around the Dublin 22 village looking for an establishment serving coddle – after taking in the great parade of course.

Many people say St. Patrick was born in Wales in 386 A.D., but technically speaking he was not, that country had not yet come into being, with the territory Wales then being a number of different kingdoms that had yet to merge into the entity we know today.

Written journals from the middle ages mention the area/townland Bannavem Taburniae as the place where the sixteen year old (who allegedly went by the name of Maewyn Succat) was kidnapped.

It is also said that the raid was orchestrated by a group of men who were acting under the orders of the famous Gaelic King known as ‘Niall of the Nine Hostages’, who it is said was a descendent of ‘Conn of the Hundred Battles’ who is regarded as the first ever ‘High King’ of Ireland.

How did Niall get his name? The annals say that after he and his troops had set out from Tara and concluded various successful raids into the four provinces of Ireland, they had kidnapped nine individuals each from a prominent family.

This hostage taking served a shrewd purpose;  He let it be known that so long as the family and troops associated to them did not attack him, the person would be kept alive, but launch a raid and they would be killed.

Another person to be taken into slavery was the son of Calphurnius, a man who was a Deacon from a Roman family of high renown and Conchessa who was a close relative of St Martin of Tours.

Succat toiled away for six years looking after sheep, according to sources I’ve read somewhere in what is now known as Co Mayo with little in the way of pay or proper working conditions.

In his ‘Confessio’, a document the man who was to become our Patron Saint wrote, he claimed that an angel told him in a dream “you have fasted well and soon you will be able to return to your own country”.

Soon after he sensed an opportunity to flee from his captors and took his chance, travelling over 200 miles by foot across bog land and through forests before he stowed away on a ship that was berthed somewhere in what is now Wexford.

Initially he had been found by the captain on board and taken off the ship, but after praying to our lord one of the sailors ran forth towards him to say the captain had changed his mind.

Another legendary tale from this part of his life is that the ship lost it’s way at sea and the men were on the verge of starvation as their food stores had run out.

This lead them turning to Patrick and enquiring of his ‘God’ he speaks about, and if this god is true, surely he would get them out of their predicament?

At that point he once again got on his knees and started praying, which resulted in a stampede of pigs descending on the spot where the men then stood.

When he returned home to his parents, he began studying for the priesthood, and in around 418 he was ordained a Deacon and 14 years later was consecrated a bishop where he was given the name Patricius.

It was then the dreams began to reappear, this time urging him to travel back to Hibernia (as it was known to the Romans), and despite the pleadings of his parents he once more boarded a boat across the Irish Sea, albeit of his own volition this time.

While others had unsuccessfully tried to convert the native Irish before him, the Bishop from Wales could speak their language and understood their ways and customs.

Thus his proselytising had a much greater effect and many Druids across the island of Ireland were won over to Christianity, which in turn led to their flocks doing the same.

What is regarded as one of the most important symbols of Irish Catholicism “The Holy Trinity”, which it is alleged he formulated after stumbling upon a shamrock while out walking.

Though not everyone in academia accepts the above widely held narrative, with one person, the Reverend Marcus Losack, a Church of Ireland Chaplain based in Wicklow even writing a book in 2013 expressing his dissenting view.

For it is in this time that he expresses his firm belief that our Patron Saint in fact came from Brittany in Northern France, but many other scholars on the subject point out the wealth of evidence that lends itself to the common belief that he was British.

So the next time you go to mass of a Sunday or merely attend a wedding or a funeral, you might spare a thought for the man who brought Christianity to Ireland in the first place.