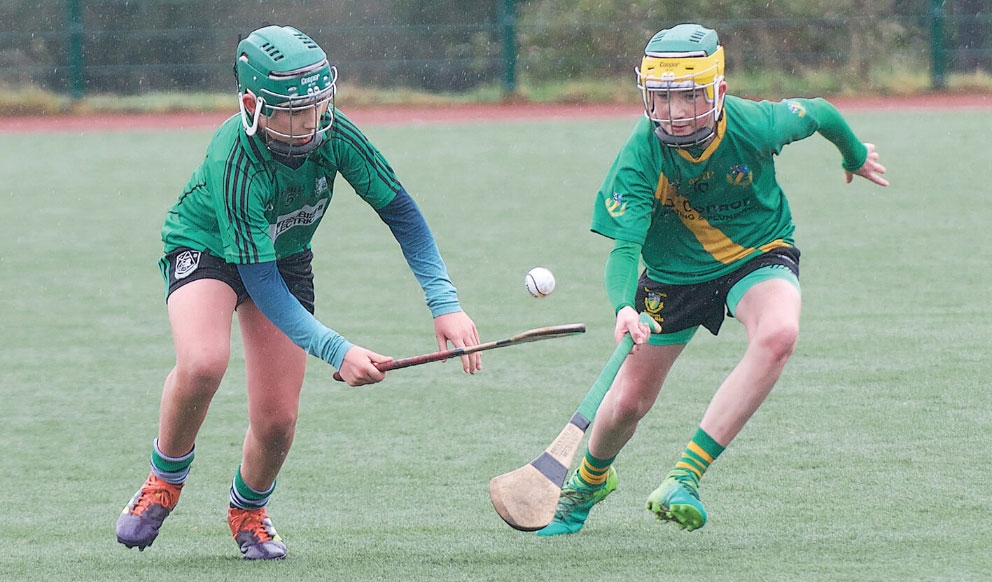 Davis in strong finish to see off Sarsfields

A STRONG final quarter from Thomas Davis helped them overcome opponents Lucan Sarsfields, as well as the challenging weather conditions, in their Under 14 Division One Hurling clash on Saturday in Kiltipper Road.

The final scoreline somewhat flattered the hosts, who had found themselves behind in the second half despite an excellent defensive showing, only to pull away late on, led by talismanic half-forward Tomás Moore.

Lucan's Alex Derrien manages to control the ball as Fionn Lynch closes in.

The opening period was an even affair, as both sides looked to get off the mark after narrow defeats in the opening round of league fixtures, and Davis made a fast start despite the wind and rain with a couple of early scores including a brilliant solo attempt from Moore.

Lucan goalkeeper Seán O’Neill was also called into action, saving well from impressive midfielder Oisín McKenna, before his side broke their duck at the other end when half-back Alex Derrien fed influential full-forward Seán Langton.

Sarsfields then restored parity with a Daragh Lyons free, and the sides continued to trade blows, with Davis ‘keeper Evan Walsh denying Langton a three-pointer.

Moore was the first to find the net midway through the half, driving home a well-taken effort out of nothing soon after, but Lucan responded in ideal fashion with a goal of their own, as good work from wing forward Daragh Meehan led to Langton converting.

Three further points from Moore, punctuated with scores from Lyons and corner forward Patrick Ryan for the visitors, meant Davis held a slender advantage at the interval, 1-5 to 1-4.

The weather was not the only contributing factor to the low-scoring nature of the game, as Davis full-backs Justin Darcy and Jack Kearney were in inspired form, while Lucan’s industrious half-back Cathal Kennedy was covering huge ground in defence for his side.

Another Sarsfields defender, Daragh O’Toole, was the catalyst for a super counter-attacking score when play resumed, as he charged upfield and Langton eventually swung over.

Thomas Davis’s poor discipline looked set to cost them, as Lyons’s subsequent free then put the visitors in front for the first time.

The lead was short-lived however, as McKenna and half-back Reece Donohoe combined for Davis moments later, before half-forward Stephen Fox slipped the sliotar home past O’Neill.

Lyons split the posts once more to take his personal tally to 0-4, but it was in vain, as McKenna’s hopeful ball into a dangerous area fell for Luke Walsh to direct it into the net, putting the match out of reach for the valiant Lucan side.