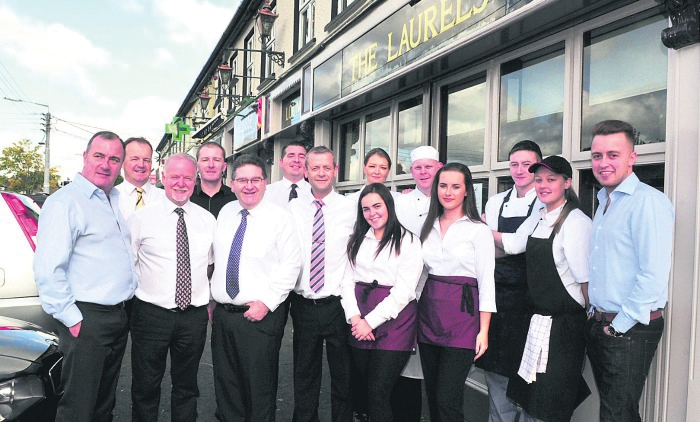 The Laurels is a real local family business success story

THE Laurels in Perrystown was established by the Hughes family in 1981, who purchased the premises for €500,000 and developed it with further capital over the years.

It was a massive sum of money at the time, and would still be considered a substantial wedge for many potential business plans today.

“It was a huge investment, and we had to work hard – there was a lot to contend with,” said Noel Hughes, who established the premises with his father Tom Hughes.

Noel continued: “It was the highest investment for a pub in Dublin at the time. A year later, we did the upstairs for €150,000, but the goal has always been to keep it going.”

Keep going it has. Having survived two recessions, yet consistently upgraded and added additional services for customers – the pub has now passed through three generations and can safely be considered a local family business success story.

“It’s all about re-inventing the place,” said Jean Hughes, Noel’s wife, who said she is looking forward to the pub’s 50thanniversary, rather than its more imminent 40th celebration.

Tommy Hughes, third generation family member of the business, said the introduction of the new kitchen builds on previous upgrades over the years.

“It’s keeping up with the times,” said Tommy.

“The kitchen has been up and running for the last five weeks, and it’s turning out excellent quality food, which sells itself. We have a head chef, sioux chef and commis chef and two kitchen porters.”

Everything in The Laurels is located on one open-plan ground floor – bar, lounge, dining area, complete with a recently installed €30k sound system and a newly installed glycol beer cooling system.

Over the years, the bar added an off-licence which has over 400 different bottles of wine, and a bookies for punters to enjoy a flutter should they desire.

In total, the bar employs 30 people, many of whom have been there for over 20 years, including senior barman Roland Dunphy and manager John Connolly.

Resting on their laurels is not something the Hughes have in mind, with Tommy revealing plans to upgrade the pub further in the new year, “without annoying the customers.”