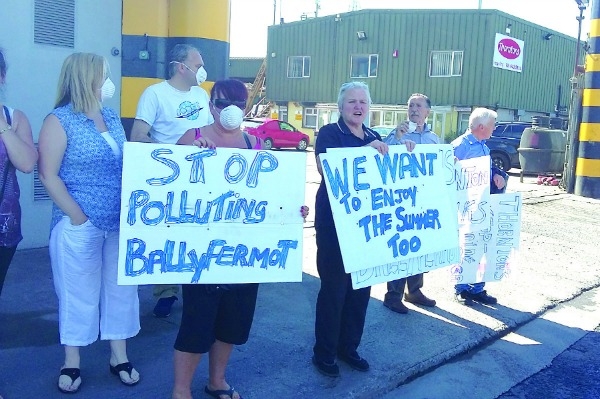 THORNTONS have installed an air curtain at its Killeen Road recycling facility this week on foot of instructions by the Environmental Protection Agency (EPA).

The location of the facility in Ballyfermot has led to complaints over the years by residents who claim it impedes on their quality of life.

The EPA received 28 complaints this year regarding odours at the Killeen Road site, and found odours at non-compliance levels on “three occasions.”

People Before Profit TD, Brid Smith, a longtime campaigner against the “rotten smells”, welcomed the EPA compliance investigation, but feels the solution is to move recycled food waste to Thorntons compost facility in Meath.

Living near to the site, Deputy Smith says odours are at their worst in the community during the summer.

“Instead of taking waste to Ballyfermot, bailing it and storing up to 27 tonnes per week there, I believe it should be going straight to Kilmainham (Meath facility), but that eats into their profits,” said Deputy Smith.

“In hot weather, it stinks. Some residents can’t open their windows, or let their kids play outside. It curtails the quality of life in the area. There is the added worry, although no scientific evidence exists yet, of the environmental implications for people living beside waste facilities. This wouldn’t happen in Castleknock.”

As a Dublin City councillor, Smith toured the Thorntons facility a few years ago, following protests staged outside the premises by residents.

John Byrne, Thorntons Marketing Specialist, told The Echo: “This (air curtain) has been installed by Thorntons as part of its ongoing commitment and review to improve environmental systems at its facilities.

“We will continue to look at best available technologies and techniques at all of our facilities in order to minimise any risks of nuisance in the areas in which we operate.”

The Echo understands that Thorntons has invested some €2.5m on odour treatments at the Killeen site, prior to the installation of the air curtain.

Deputy Smith welcomed the installation of “an extra curtain to prevent the smells interfering with areas beyond their boundary.”

“It also means that when we complain we will get results, even if it is a little bit at a time.”

The EPA said: “We will continue to monitor and assess emissions from the facility and will take the necessary enforcement actions to ensure compliance with the conditions of the licence.”