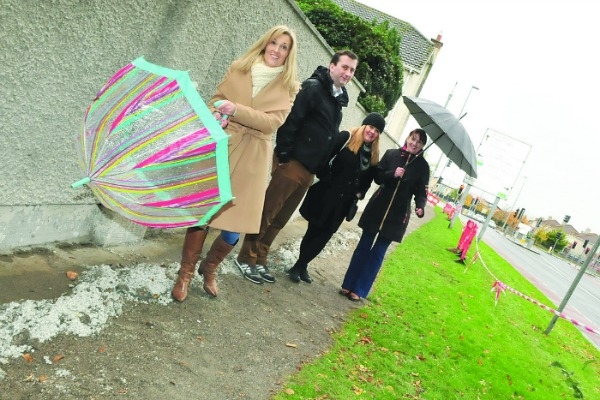 The Foxborough Residents Association have been campaigning for many years for SDCC to carry out the work which was left unfinished when the estate was built.

On Tuesday, Cllr William Lavelle met with Valerie Ennis, Chairperson of the Residents Association and two members of the association, Lesley Keogh and Traci White, to examine the work.

Valerie told The Echo: “it is great to see the work being carried out now. We have waited many years for this. The council kept on saying ‘no’, ‘no’, but finally they said ‘yes’.

It is quite a big estate with 850 houses, so we always raised the point with them that €200,000 was being collected every year with property tax. The road is very busy with two schools at either end.”

Cllr Lavelle and the ladies from the residents association examined the work which started last week on the walls.

Cllr Lavelle told The Echo: “Earlier this year I secured funding for the plastering of boundary walls which residents had sought for 20 years. It is great to see the work starting. It will be completed in a few weeks.”