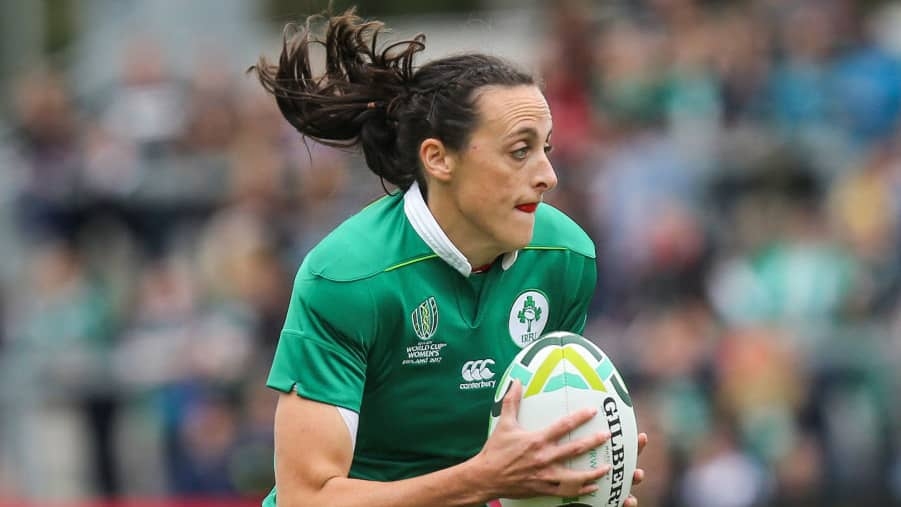 Tyrrell looking forward to a return to Six Nations action

DESPITE the likely prospect of the game taking place behind closed doors at Donnybrook Stadium, Hannah Tyrrell can’t wait for Ireland to resume their Women’s Six Nations campaign against Italy on Saturday week.

The Clondalkin native was a 63rd minute replacement in the side’s last competitive outing- an away defeat at the hands of England way back on February 23.

Now fully focused on a 15s international career following a lengthy stint in the IRFU’s Sevens programme, Tyrrell will be hoping to remain in Adam Griggs’ plans for the rest of the year.

“To be honest, I’d take any sort of game at the minute” said Tyrrell. “We’ve had a couple of squad games between each other. They’ve been just as fierce as any international we’ve had.

“Whether there’s a crowd there or not I won’t be too fussed. Obviously it’s great to have the backing of the crowd. We’re just looking to get out there and playing again. Get back on track and start preparing for the World Cup qualifiers in December.”

Indeed, while Tyrrell and her team-mates are aiming to finish an elongated Six Nations Championship on a high, she acknowledges earning qualification for next year’s World Cup in New Zealand has always been the main objective for 2020.

“That’s our main aim for the year. Who doesn’t want to play in a World Cup in New Zealand? There’s a lot of girls in the squad who haven’t played in a World Cup before.

“We’re very hungry and really hoping we can put in performances. Get the results we need and qualify for the World Cup for next year” said the Dubliner.

An All-Ireland minor winner with Dublin in 2008, Tyrrell made an unexpected return to ladies football with her adopted club Na Fianna in the past few months.

It had been all of six years since her last competitive appearance – in the green and white hoops of Round Tower Clondalkin – and the school teacher was thrilled to dip her toes back into the sport.

“That wasn’t something I really planned on doing” she explained..

“When rugby was still announcing it wasn’t coming back, and GAA was starting up, I joined my local club around the corner. To be moving to a new club was tough, but I really enjoyed it.

“We had a really good run [Na Fianna reached the senior championship semi-final] and it was just a real nice distraction after all the solitary training I’d been doing,” Tyrrell added.