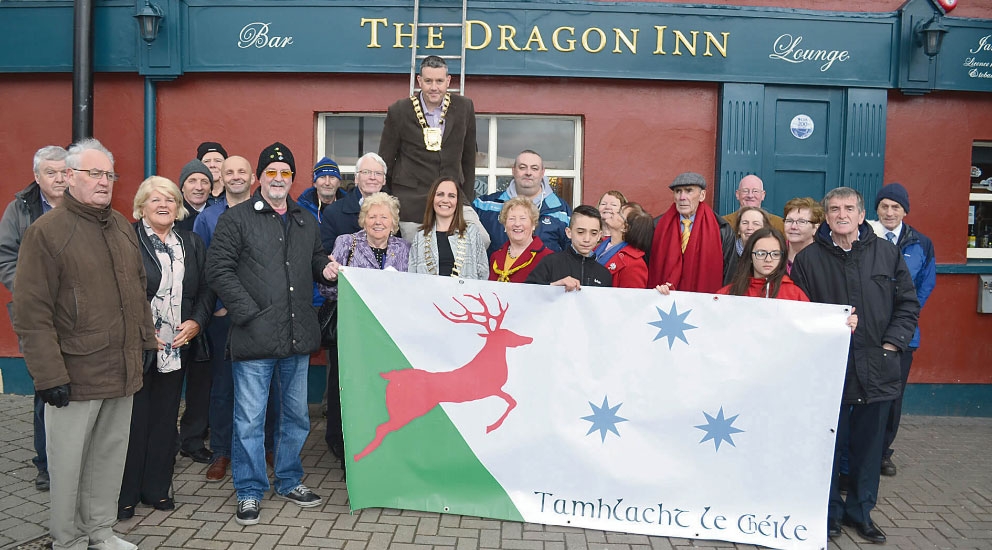 Unity Flag of Tallaght hoisted high over The Dragon Inn

TALLAGHT’S Unity Flag was hoisted for the first time last week, with this symbol of the area’s ‘past, present and future’ now flying above the Dragon Pub in Tallaght Village.

On Holy Thursday, members of the Tallaght Historical Society, which commissioned the printing of the flag onto cloth, gathered at the Dragon Pub for the official raising – which was also supported by Tallaght Community Council (TCC).

Flying the flag: The Unity Flag of Tallaght was raised over The Dragon Inn

The flag, which was designed by Springfield resident Seos Ó Colla, has a number of elements – including three blue, eight pointed stars, that represent Tallaght’s past, present and future.

The green strip represents the Tallaght mountains and the area’s parks and fields while the red deer symbolizes the Deer Park that was once owned by the families of Old Bawn House in the 17th century.

There is also the mythological association of the deer with Fionn Mac Cumhaill and his son Óisin, who have links to Glenasmole.

According to Anne Hanrahan, of the Tallaght Historical Society: “The flag is known as the Unity Flag of Tallaght and it is intended to be a symbol of identity for the Tallaght area and is a true cross-community effort representative of all of the people of Tallaght.

“We are delighted to have the flag flying over the Dragon.

“This pub is located right in the middle of the village and everybody passes by.

“It’s also an old landmark in the village with its own historical significance.”

She added: “Last Thursday was the first time that the flag was officially raised and we’d like to thank the Dragon and Tallaght Community Council for their support.

“We have been contacted by several other people about getting a flag and are currently in the process of making replicas of the flag.”

For further details and for all events organised by the Tallaght Historical Society, visit the group’s Facebook page.