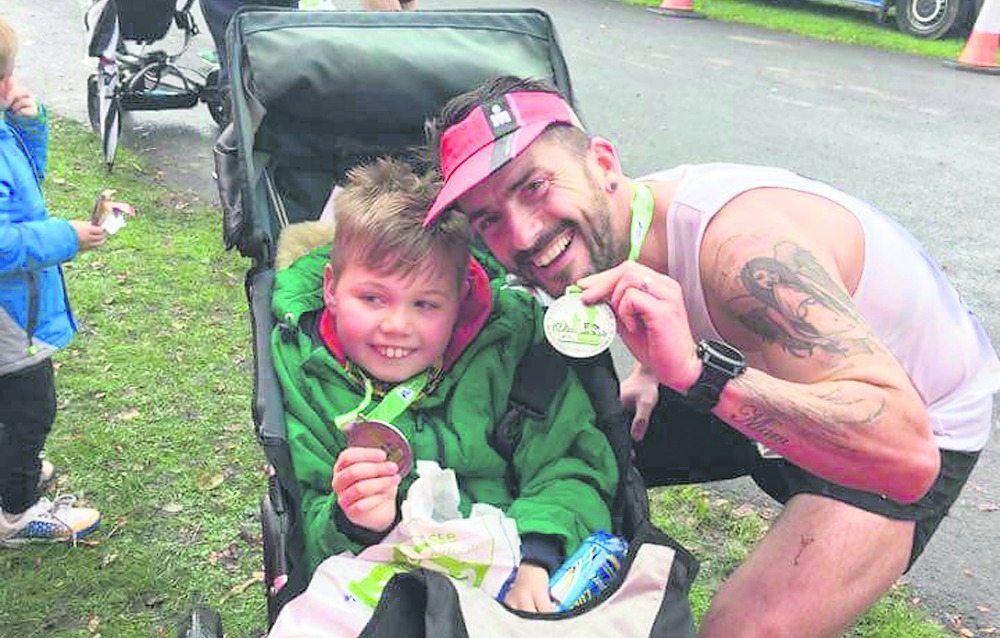 Warrior James completes the half marathon

LAST SATURDAY, Lucan’s Team James completed the half marathon in the Phoenix Park.

James Casserley (10) took part in the race in his wheelchair accompanied by Mark Lacey.

At the end of October James and Mark will compete in the SSE Airtricity Dublin Marathon which will be a first for a wheelchair athlete pushed by another.

The half marathon was also a first for a duo of their type and to celebrate this they got to run off first at the start.

James’ mother Vicki Casserley told The Echo: “They led out the runners at the start. There was a huge feeling of adrenalin and achievement. It is really very important for James to prove that disabled athletes can still participate in sports.”

Vicki said: “James was absolutely thrilled to complete the race. He is really looking forward to the marathon. It has been a great experience for him.”

Mark and James train in the Phoenix Park every Sunday morning and anybody can join in and run with them.

James was diagnosed with Cerebral Palsy when he was two, a condition which affects his core and lower limbs mostly. This leads him to have difficulty with independent walking and balance.

When James was six, he had a selective dorsal rhizotomy, a type of neurosurgery which eliminates the spasticity in his body which is a result of his cerebral palsy. The little warrior endured intensive physiotherapy as part of his recovery where he had to relearn how to move and walk again.

More recently James was diagnosed with idiopathic juvenile arthritis in most of his joints. As a result of this, he suffers from pain and lethargy most days. But this will not stop James who has a very can-do attitude and a massive smile. He likes to put the ability into disability and show everyone he is just like any other ten-year-old.

Next up for the duo is the SSE Airtricity Dublin Marathon.