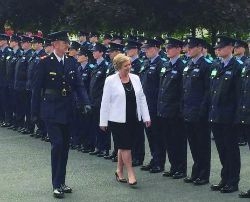 ADDITIONAL garda resources have been assigned to stations in West Dublin this week – after it was revealed that 26 gardaí have been cut from the area since 2010.

Stations in the area will see 10 new garda recruits take up positions in the coming weeks after graduating from Templemore recently.

It is understood that the 10 new gardaí will be stationed in Clondalkin and Lucan and will help with local policing on the “frontlines”.
Since 2010 Clondalkin Garda Station has lost a total of nine gardaí with just 88 members stationed in the area as of April 30.
The figures, which were revealed by a recent Fianna Fáil parliamentary question, also show that Lucan Garda Station has lost 11 officers since 2010.
Ronanstown Garda Station has also been affected by the reduction in numbers, with six less gardaí there since the same time five years ago.
The 10 new recruits are expected to bump up the number of gardaí working in both the Clondalkin and Lucan areas over the next number of months.
Minister for Justice Frances Fitzgerald described the new recruits as “guardians of the peace” after they, along with 87 other officers, left Templemore last week.
She said: “Frontline and community policing is a priority for me. Five hundred and fifty new Gardaí will have entered Templemore under this Government.
“In September 2014, the Government oversaw the first recruitment of new Gardaí since 2009. We reopened the Garda College in Templemore and committed to not letting it close again.”
As of April 30 this year the Dublin Metropolitan Region (DMR) West Division, which includes Clondalkin, Lucan and Ronanstown, had a total strength of 683.
There are also 60 Garda reserves and 45 civilians attached to the division with the new recruits still to arrive.
In addition to the 97 new gardaí graduating from Templemore this week there were also 19 garda reserves accepted into the force.