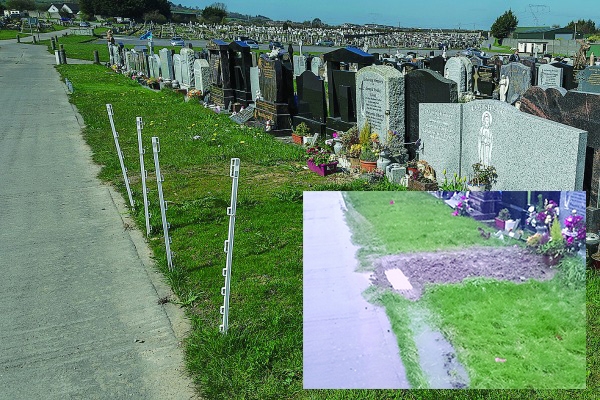 Widower hits out at council over car tracks on graves

A TALLAGHT widower has claimed that South Dublin County Council are neglecting Bohernabreena Cemetery after a car drove over his wife’s grave, reports Brendan Grehan.

John Coughlan from Bancroft lost his wife Catherine in 2004. Before Christmas his son fixed up the grave with a new layer of topsoil.

On Christmas Day, John drove up to pay his respects to Catherine but he was shocked at what he saw.

He said: “I was delighted when my son sent me the photograph of the work he had done on the grave. When I went up on Christmas Day I was horrified to see that somebody had driven over the grave and another grave, leaving a tyre track.

“I was absolutely disgusted. I was really upset. It ruined the whole Christmas for the family.”

John thinks that Bohernabreena must be the only cemetery in Dublin that lets people drive in.

He said: “There is no other graveyard in Dublin that you can drive around the grave freely. I think that cars should be banned from the graveyard. It gets so bad sometimes that cars overtake each other in the graveyard. Some motorists get really annoyed if you don’t get out of the way if you’re at the grave.”

John believes that a car ban in Bohernabreena would serve two purposes.

He said: “People would be able to go up and grieve and not be disturbed with cars driving past. It would also prevent the problem they have at the moment of youths hanging around in cars waiting to rob people. If there were a number of cars in the car park maybe people would feel safer.

The Echo contacted SDCC about the problem of vehicles driving onto the graves in the cemetery.

A spokeswoman told The Echo: “In an effort to prevent this encroachment, solutions are being examined with a view to having the matter fully and permanently resolved in the coming weeks. In the interim, traffic movement in the cemetery will be monitored.”

She added that there is currently a bollard system in place in the cemetery, but the system “has been the subject of a number of attacks and has been repeatedly vandalised, with bollards being forcibly removed by members of the public”.

She added: “As a result, plans are also been drawn up for the installation of CCTV in the cemetery in an effort to mitigate against this and any other incidents of this nature.

“Funding of €200,000 has been committed for 2016 for resurfacing and improvement works to the car park and cemetery entrances and the installation of CCTV as mentioned.”