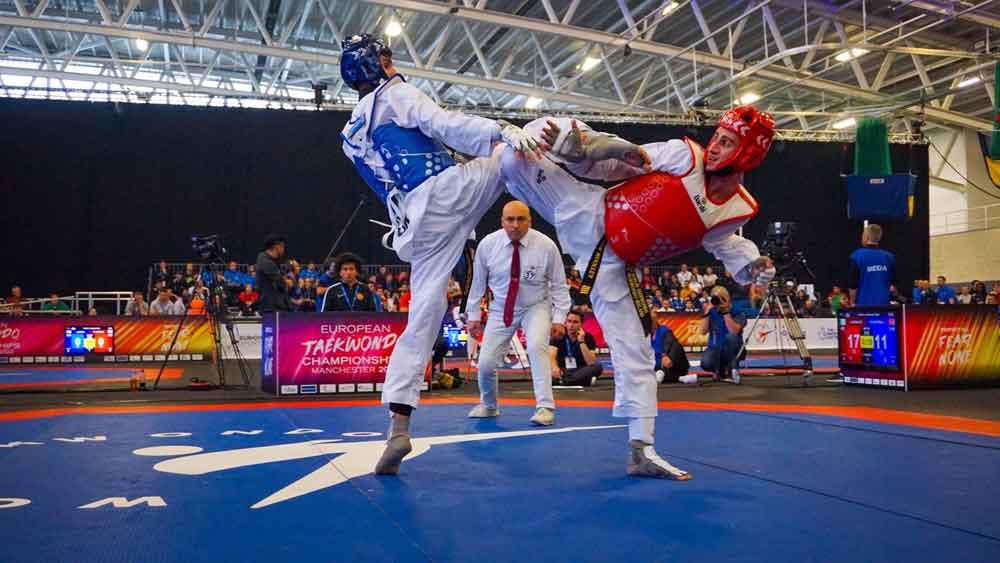 TALLAGHT’S Jack Woolley landed a silver medal at the 2022 European Senior Taekwondo Championships at the Manchester Regional Arena on Friday.

The South Dublin Taekwondo star, who is currently ranked third in Olympic rankings, was hugely encouraged by his performance which saw him push defending champion, Cyrian Ravet all the way in the Flyweight decider.

Indeed, only a solitary point separated the two up to the closing ten seconds of their match before the French man pulled away for a 12-5 victory.

“I’m delighted to have won silver” Woolley told The Echo.

“Obviously we wanted to go out and become European champion. I have a few European silvers now. I just never quite managed to get to the top of the podium.

“But, to get a silver in what is the most dominant continent in the world, I’m really happy. It’s the toughest place to be fighting and to come away with silver and very valuable ranking points is great.

“The lad I fought in the final, [Ravet] it’s always a close match between us.

“I was losing by one point with five seconds to go in the final. I had to chase it and I just got caught in the head, so it was literally down to the wire.

“I had to take the risk and unfortunately it didn’t pay off, but it could have been a completely different conversation if it did.

“The plan was to go out and give it socks because I was on fire throughout the day in high-scoring matches, so the aim was to try and keep that up.

“But he [Ravet] is a really smart fighter and he knew he had to slow me down.

“After the first 30 seconds, I knew I had to change the game plan and slow it back down to keep it a close match and then just go for it at the end.

“The risk didn’t pay off, but it could have” he said.

Woolley, who was seeded second behind Italy’s Olympic champion, Vito Dellaquilla, kicked off his European campaign with a 28-0 demolition of Serbia’s Filip Hajnal in the Last 16.

That set him up for a quarter final clash with Turkey’s Omer Faruk Dayioglu against whom he fought back from behind to clinch a 17-14 victory and a meeting with Adrian Vicente Yunta in the penultimate rounds.

The young Spaniard – a Tokyo Olympian – had beaten Woolley in their previous three encounters, but this time round, the Dubliner fought relentlessly, refusing to afford his opponent any time or space.

The match was stopped on a score of 49-23 to Woolley as a result of the Spaniard accruing 10 penalties.

It paved the way for a title match-up against Ravet who had seen off Olympic gold medallist Dellaquilla in his respective semi-final.

The decider, which was broadcast on BBC, saw Woolley fall a point behind the defending European champion at the close of the first round.

Round Two ended at five points apiece before Ravet served up a power punch to edge back in front by the narrowest of margins.

And in the closing ten seconds, Woolley opted to go for it at the cost of leaving himself open to the counter, Ravet duly landing two kicks to emerge a 12-5 winner.

Woolley will not have much time to savour his European silver medal win with the much-anticipated Rome Grand Prix taking place next week.

“That has even more ranking points than the Europeans so, in that sense, it’s probably more important” explained Woolley.

“The top 32 in the Olympic rankings qualify and so it’s not just Europeans at this.

“Number Four in the Olympic rankings [Spain’s Adrian Vicente Yunta] I beat in the semi finals and that means I get more points and extend the gap a little bit.

“I’m a little bit more comfortable in the rankings, but obviously you just can’t take your foot off the pedal.

“In my head I’m Number Three now, so why not try and get to Number One. The Olympic champion, [Vito Dellaquilla] who’s Number One in the Olympic rankings, got a bronze at the Euros, so who knows what’s in store” he pointed out.