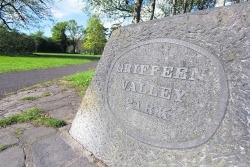 GRIFFEEN Valley Park and Waterstown Park are each set to receive a €180,000 works bonanza.
Funds allocated from the South Dublin County Council Budget will see a major refurbishment works of playground areas, carried out in both parks this year.

The refurbishment of the existing playground in Griffeen Valley Park will necessitate a temporary closure of the park for approximately five months, once works commence.

Independent Councillor Guss O’Connell, who officially opened Waterstown Park five years ago, hopes the works are completed at both venues by October.