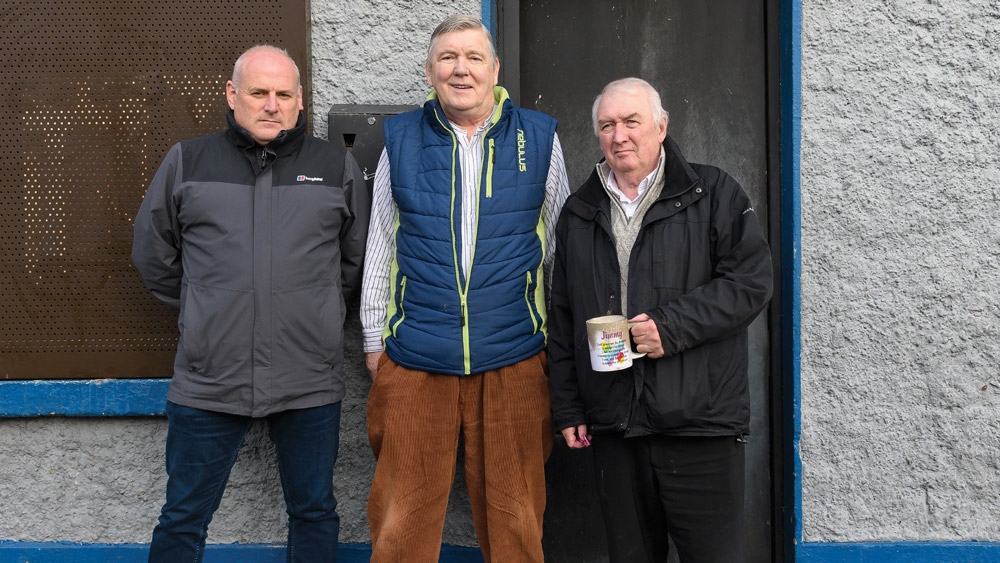 AA members Stephen, Greg and Jimmy outside the premises destroyed by fire at the weekend

AA members are devastated at loss of village premises

MEMBERS of a local branch of Alcoholics Anonymous (AA) have shared their devastation at their premises in Tallaght village being destroyed in a fire over the weekend.

The group, which in a typical week holds 20 meetings for in excess of 700 members, received news this week that they will be able to continue their services at the St Aengus Community Centre.

They will be housed in the community centre on an interim basis, with Tallaght AA members hoping that their former premises at the old post office in Tallaght village will be rebuilt and restored.

Greg D, who is from Firhouse and was one of the founding members of the Tallaght branch of AA over 40 years ago, said the building has a particular resonance for the members.

“Then Fr Paul from the Priory said we could have the old post office. I remember when he showed us the room, that it seemed too big.

“I said that we could run a dance in that room, that we’d never be able to fill it.”

However, as the population of Tallaght grew, so did the demand for AA services which saw the former post office become a busy hub for people coming to and from meetings.

Explaining the work of AA, Greg said: “We give them a welcome, a cup of tea and a programme of recovery.

“If people need a dig out, we tie in with them and let them know where they need to go and keep them safe.

“When they arrive in here, we’re presented with a broken person, and we see our function as being there to help them.

“We have a programme of recovery, we have sponsors, and it’s incredible to watch people getting well again.”

This is particularly impactful for Greg, who said he was “totally dependent on alcohol” between the ages of 15 and 30.

“I was fortunate to survive,” he said. “I survived with the intervention of AA meetings.”

The members of Tallaght AA have developed a strong sense of community as a part of the group and were devastated when they saw the old post office building go up in flames on Sunday.

“There was a tremendous sense of loss,” said Greg. “I know all of the different secretaries and members who’ve gone through that building, it’s as though a human being was taken away from us.

“It had a life of its own. It was a place of safety and serenity and now it has vanished in the space of a day. It’s completely gutted.

“For so many people, going to AA meetings is an integral part of their lives, and we want to keep the group together.”

On Tuesday afternoon, Greg received word that the group could temporarily relocate its meetings to the St Aengus Community Centre in Castletymon.

This has brought about a sense of relief for the members of Tallaght AA, as the meetings can now continue as normal.

“I’m delighted,” said Greg of the news. “We don’t have to turn anyone away now. We’re open for business and we can continue to do what we’ve been doing.

“Our objective is to get back to where we were, but on an interim basis we’re here and we’ve very fortunate.”

The Tallaght AA meetings times in the St Aengus Community Centre are 11.30am and 8pm every Monday, Wednesday and Friday.

On Tuesdays and Thursdays, meetings are held at 1pm, there’s a morning meeting on Saturdays at 11.30am, and on Sundays the meetings are at 8.30am and 11.30am.