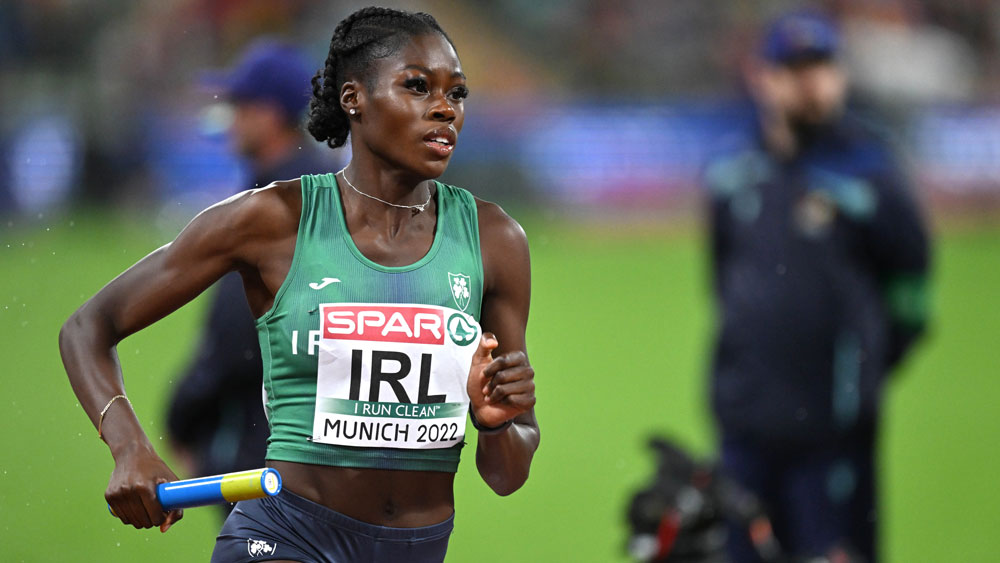 Rhasidat Adeleke of Ireland competes in the Women's 4x400m Relay Final during day 10 of the European Championships 2022 at the Olympiastadion in Munich, Germany. Photo by Ben McShane/Sportsfile

Racing in the third leg, Adeleke (who currently represents Texas University in US) made serious ground – as she had in the previous day’s semi-final – to move Ireland from seventh up to fifth coming up the home stretch. It proved to be a bridge too far for the Irish team as the Netherlands, Poland and Great Britain stormed away into the medal positions, but it was a strong run overall from the Irish quartet on show as they clocked a final time of 3:26.63.

Adeleke had already enjoyed a productive championship as she claimed a very respectable fifth in the 400 metres final at the German capital on Wednesday night. Her time of 51.08 in this race was a new national record and she also helped to ensure a new Irish relay record was set at the semi-final stage of the 4 x 400.

In a tough field, it was Wexford’s Sophie Becker who led Ireland from the front and she had her team in the top-six by the time she handed the baton over to Cork athlete Phil Healy. The competition became ferocious from here and even though Adeleke was in a difficult position for her leg of the final, she showed her mettle by overtaking a brace of runners in advance of Sharlene Mawdsley taking over for the final 400 metres.

Adeleke has been a ubiquitous presence on the athletics circuit throughout 2022 and the performances she delivered during the European Championships – which saw her appearing in senior finals for the first time – should stand her in good stead as she looks to make further progression in her fledgling career.