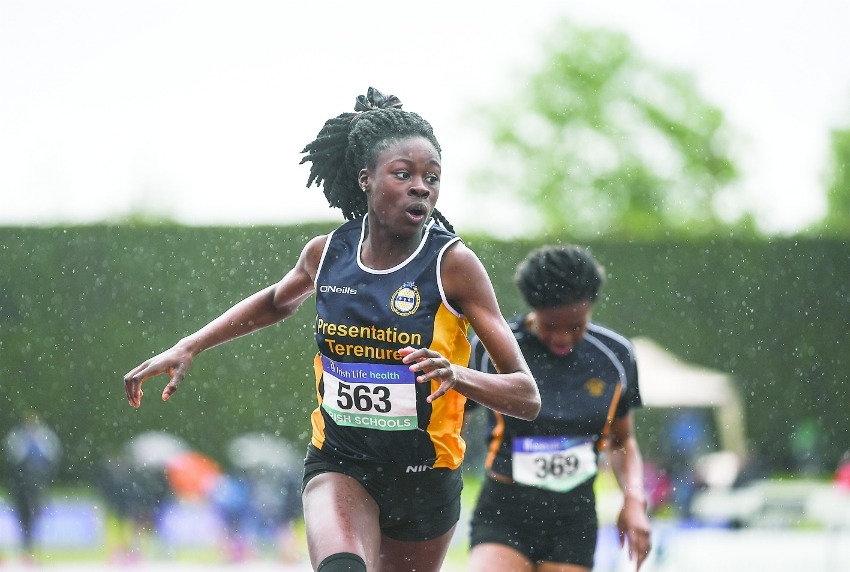 Adeleke on the double

RASHIDAT Adeleke continues to prove a dominant force in junior sprinting after she made it a double in the Irish Life Health All-Ireland Schools Track and Field Championships in Tullamore last weekend.

Representing Presentation Community College in Terenure she stormed to victory in both the Junior 100m and 200m.

In the former, she clocked 12.32 seconds on her way to seeing off the challenge of closest rivals Nikolka Stevankova of Laurel Hill and third place Yemi Talabi of Kings Hospital.

A time of 24.70 was good enough to see her secure gold in the 200m ahead of runner-up Ailbhe Doherty of St Flannan’s.

This success came hot on the heels of her same double at the Leinster Track and Field Championships in what has been a tremendous year for the Tallaght Athletic Club star so far.

Indeed she previously carded a qualifying standard for the European Youth Olympics when she won the Women’s Under 16 Juvenile 200m title in a record time of 24.44.

Meanwhile in the Junior Girls Long Jump Jennifer Hanrahan of OLS Terenure cleared a distance of 5.32m to take gold while in the Minor Boys equivalent, Reyan Issah of Terenure College went top of the podium after an effort measuring 5.93m.

His school mate Eoghan Keaney came home in a time of 6:26.87 for second place in the highly-competitive 2000m Steeplechase behind Belvedere College’s Brian Fay.

In the Minor Girls 100m, Nadislane Kabongo of St Colmcille’s CS produced a very impressive performance to emerge victorious in a time of 12.82 seconds.