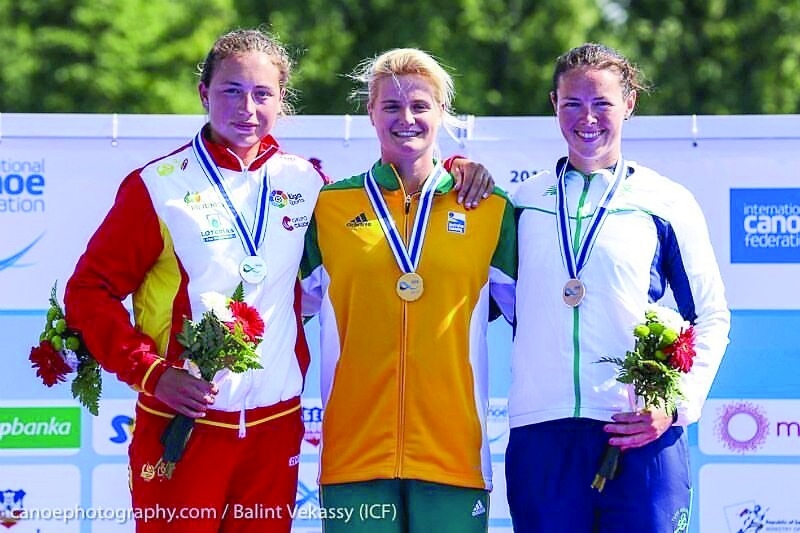 Egan makes the ’grade in Serbia

JENNY Egan was back on the ICF World Cup podium again after finishing third in the Women’s K1 5000m event in Belgrade on Sunday.

The Lucan kayaker, just a couple of weeks after having won gold in the same division at World Cup 1 in Portugal, secured bronze in the third instalment of this year’s series.

Clocking a time of 22.35.600, Egan finished behind Spain’s Laia Pelachs and winner Alyssa Bull from Australia having had to contend with the hot conditions and a recurring neck injury in the process.

“I was very happy with this medal because it had been a very tough week” she told The Echo. “The neck and shoulder trouble I’ve been having came back on me again and so it made it even harder.

“This is a medal I will really cherish. It’s a very tough field of women in the World Cup competition.

“A lot of the countries send two competitors who are usually fighting it out for a European spot to it was great to get the medal.

“It was very challenging conditions on the Sunday. It was 32 degrees on the water, so very intense. There was a little bit of a breeze so that helped,” she recalled.

On top of her medal win at the weekend, Egan also made the B Final of the 500m and finished up ninth which left her 18th overall in this division.

This followed up on her season’s best performance in the 200m the previous week, in which she was just .1 of a second of her own Irish record, while also carding a season’s best in the 500m at that meet.

It leaves her in confident form as she heads into a five-week block of training ahead of the European Championships in Bulgaria in mid July.

It will be the Dubliner’s first time competing at that venue since she was a junior and she will be hoping she replicate the form that saw her win bronze at this very event two years ago.