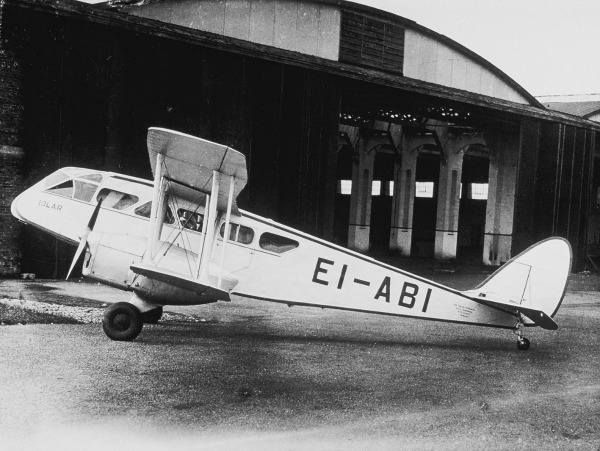 The flight, which headed to Bristol Whitchurch Airport, took off from Baldonnel Airfield (now Casement Aerodrome) on May 27, 1936.

Its first flight took place in a six-seater De Havilland 84 Dragon biplane that was named Iolar (eagle) and had the registration EI-ABI.

South Dublin remained the home of Aer Lingus until January 1940, when Dublin Airport opened in the suburb of Collinstown.

Throughout its time at Baldonnel airfield, the airline established routes to London and Liverpool, with its Bristol service continuing on to Croydon in South London.

A second aircraft, with the capacity to carry up to 14 passengers, was also purchased in its inaugural year – a four-engined biplane De Havilland 86 Express which was named Éire.

Aer Lingus’ time at Baldonnel Airfield also saw the establishment of Aer Rianta (now DAA) by the Irish government in 1937, to establish responsibility for the new airline and the aviation infrastructure throughout Ireland.

The year 1938 saw the purchase of a further two aircraft for the airline, a de Havilland DH.89 Dragon Rapide replaced the airline’s first aircraft Iolar and a second DH86B was brought into the company.

In its final full year at Baldonnel, Aer Lingus introduced its first metal aircraft when it purchased two of the record-breaking Lockheed 14 which carried up to 14 passengers.

The first general manager of Aer Lingus was also introduced during its time at Baldonnel – Dr JF Dempsey, who joined the company from Kennedy Crowley & Co, the predecessor to KPMG.

Following Aer Lingus’ time at Baldonnel Airfield, it was re-named Casement Aerodrome in 1965 in remembrance of national hero Roger Casement who was executed in 1916.

Casement Aerodrome now serves as the home of the Garda Air Support Unit and is the property of the Irish Department of Defence.

Britain’s Queen Elizabeth also landed at the aerodrome on her state visit to Ireland on May 17, 2011.