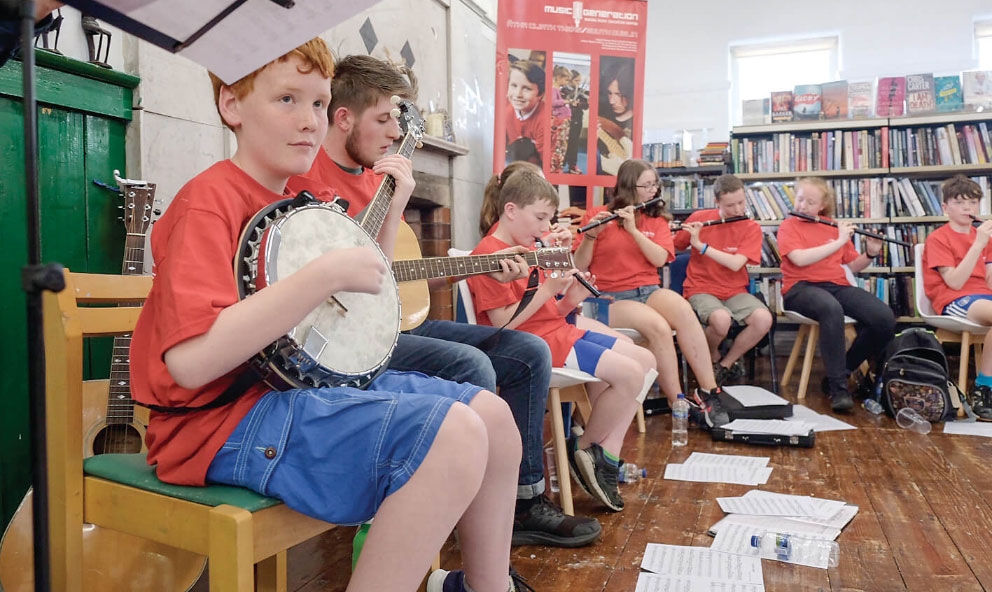 NOW in its ninth year, Music Generation has grown at an exponential rate since its establishment in 2010 and over the month of January the South Dublin string of the initiative has launched two brand new programs.

The first of which is called ‘Tallaght Strings’ and is a community-based project for young violin players in second to sixth class that have a years’ experience or more with the classical instrument.

‘VIVO Voices’ is the second program and was officially launched at an open audition on Tuesday, January 22. The new county-wide project was launched in Rua Red and gave students aged 12 to 18 a chance to join a vocal ensemble.

Aideen McLaughlin has been involved with Music Generation since 2013 when she served as a musician and administrator in the Carlow operation before moving up to Music Development Officer in South Dublin in November 2017.

She caught up with The Echo last week to tell us all about the new programs ‘VIVO Voices’ and ‘Tallaght Strings’, and about a sudden emergence of culture in the music scene across the county.

What can people expect from Vivo Voices?

One of the plans is to develop a county choir this year. Now, that might have some negative connotations when people hear choir because choirs are typically old school and strict but it’s really fun and relaxed and lets singers explore their talents with popular and contemporary music.

It’s a vocal commission and we want people from all over the county to come together for it, it’s a county initiative for secondary school students.

Students might have this great music education in primary school and then when they leave and move on to secondary school, they mightn’t necessarily have the same facilities there so we’re hoping to have a good community development for music so children can keep pursuing it.

I couldn’t advocate singing enough as an exercise because it releases these happy hormones. It’s great fun.

How strong would you say the music industry is across South Dublin County?

There is a whole culture of music and a new landscape of music emerging across the county. We use a studio space in the County Council offices, just in Rua Red called Contact Studio and our ‘Suburban Sounds’ program for 12 to 18-year olds takes place there and it’s great, it’s like a pre-cursor to third level education.

‘Suburban Sounds’ musicians get to record in Windmill lane, there’s a concert in The Civic at the end of the year and they get to really exercise their writing ability – but that’s just one of our programs.

It’s been exciting to be a part of Music Generation so early on in the process and witness its growth over the past six years, it’s giving those in the area access to the facilities they might need to help expand their musical knowledge.

When U2 and The Ireland Funds funded the programme 10 years ago they just wanted everyone to have access to music tuition regardless of their background because music education was generally not widely accessible, and this has helped fill in that gap over the years and start that conversation – and now we’re seeing that emergence, the music industry in this county is so strong and it has absolutely grown.

Tallaght Strings is a pretty niche market, where did the idea come from to launch this initiative?

People wouldn’t usually link classical strings and this area, but there are schools across the county that have been engaging in classical strings for years now and particularly Sister Bernadette from St Agnes Primary School, she really helped lay the ground work.

Schools in the likes of Brookfield, Clondalkin, Rathcoole and so on have already learned instruments in that area, so this is just a chance for young people in those areas to play with their instruments in an ensemble after school hours.

Do people need to already have a years’ experience with Violin to take part in Tallaght Strings?

Yes, they have to already have a years’ experience with a violin at a local primary school level. This is for those students who are open to the continuation of learning the instrument after school.

We have an instrument bank there too so they don’t even need their own and it’s being launched in Scoil Aoife CNS from 3 to 4pm in Fortunestown on Monday, January 28.

For people wanting to learn how to play an instrument or be involved with music but are maybe still feeling a little hesitant about going for it – what advice do you have for them?

Music Generation is not here to take any opportunities away from music schools, it’s here more to open the door, give those the opportunity to ignite the musical spark inside of them before they can go to a music school.

The emphasis isn’t on excellence here, it’s about giving people an opportunity to freely express themselves and develop their skills in the process, it is like a pre-cursor to third level education, not a replacement.

We’re a music rich county and we are just one aspect of that but what I can say is that it is never too late to start. Start simple with maybe a vocal program and choir, then go on to pick up an instrument like a ukulele because instruments are so accessible through our community hubs – they are a nice gateway for seven to 18-year olds into music.

You’re launching two programmes in January, but what are Music Generation South Dublin’s overall goals for 2019?

2019 is set to be a really big year for us and we really want to help develop the face of our program across the county because I guess there has been a bit of a cultural shift towards performance arts, specifically with trad, rap and spoken word.

The community is really working together and an identity is emerging out of that work. We really want to consolidate the programs to continue to grow. We want to continue to maintain our attendance and participation levels across the board in our trad, strings and county vocal ensemble programs.

Along with the Ruaille Buaille Children’s Music Festival, were also hoping to have a summer extravaganza around the end of June that will showcase the cream of the crop from all of our programs from the past five years.

There are so many things that we have going on this year so just stay tuned and if anyone is looking for more information or to join a program, they can email me at: amclaughlin [at] sdublincoco [dot] ie