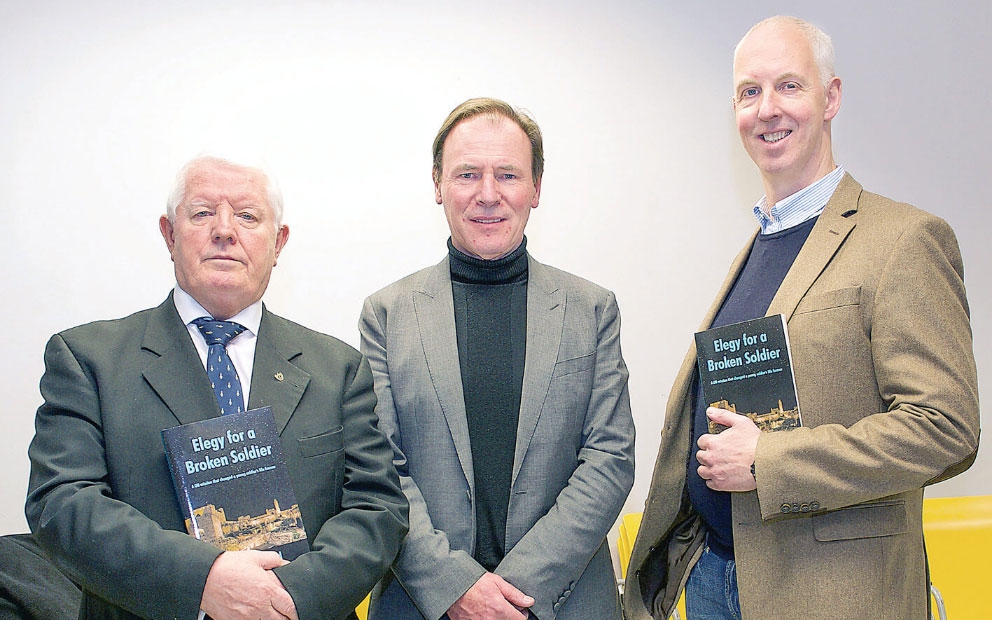 ELEGY for a Broken Soldier: ‘A UN mission that changed a young soldier’s life forever’ is the memoir of retired Irish Army officer Chris McQuaid that was officially launched recently.

The event was held in Tallaght Library and was hosted by the acclaimed writer of ‘The Siege of Jadotville’ and former Echo reporter, Declan Power.

The harrowing memoir details his time in the army, from when he joined the Irish Army as a fresh-faced 17-year-old to when he dealt with a life-altering event two-years later that would lead to Chris’ internal battle with Post-Traumatic Stress Disorder for many years.

“I went to Jerusalem when I was 19 on a UN mission, and well let’s just say that part of the book deals with rape,” said Mr McQuaid about the event that still haunts him today.

“It’s not a suitable book for a younger reader, it’s a very mature book and it wasn’t an easy thing to do but for whatever reason I decided to do it.”

Chris began writing down his thoughts after being released from hospital in September 2013, and he told The Echo about the difficulty in putting his experiences out there for others to read.

He said: “When I came out of hospital, I put my laptop on top of my piano and I just started writing.

“I didn’t stop and it was a complete mess but through the work of Don Lavry and Imelda Conway Duffy, they really helped me focus my thoughts and put together a cohesive story.

“It was a painful and disturbing journey back into my mind because what happened me in 1965 when I was 19, I buried that very deep inside until two doctors dragged it out of me in 1993 – and that was incredibly hard.

“He (the abuser) was a corporal in the Irish Army, and nine months later he was married, he’s dead now but it’s messed up because nothing was done, I just had to swallow what had happened.

“It hurt big time, but the jury is still out whether or not writing this has done more good than bad for me. At first there was the euphoria of doing it and holding the book in my hand, but I do have a lot of bad days.

However, in 1980, Chris’ life was threatened while on a peacekeeping mission with the UN in Lebanon and the resulting shock from the incident essentially ended his military career after six tours.

“An elegy is an address, its like a poem to a deceased person and that’s what this was because the person who I was when I was 19 was killed and this was my way of saying goodbye.

‘Elegy for a Broken Soldier: A UN mission that changed a young soldiers life forever’ can be purchased on Amazon with eBook also available.