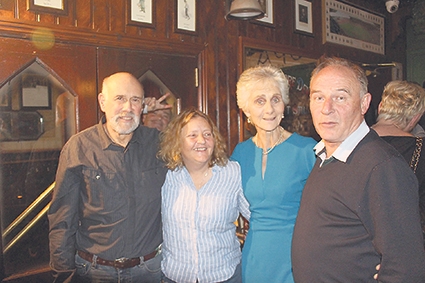 Heroin destroyed multiple lives and communities across Dublin West in the 1980s and 1990s, before services were equipped to tackle the epidemic.

When the Aisling Clinic in Cherry Orchard was established in 1992 it was dealing with a high number of patients with Aids/HIV – a symptom of shared needles.

Staff at the Ballyfermot clinic endured difficult working conditions in the early days, often threatened with violence, intimidation, physical attacks, along with the underlying fear of contracting a transmissible disease.

However, staff never deviated from treating “all patients with respect, dignity and the best medical care that could be given”, according to Dr Patrick Troy, who works at the Aisling Clinic.

On October 25, staff and former employees of the Aisling Clinic gathered in the Merchant Pub in the city centre to celebrate the 25th anniversary of the service.

Speaking to The Echo, Dr Troy said the service has come a long way in that time.

Dr Troy said: “Aside from the addiction to heroin, many drug addicts had contacted blood-borne diseases from injecting the drug. By the mid-1980s, injecting of heroin had become an epidemic and with it came the disease of Aids/ HIV, which ravaged Ballyfermot and Clondalkin. So bad was the epidemic that Dublin West accounted for one-third of all AIDS / HIV cases in Ireland in the early 1990s.

“The Aisling Clinic was in essence a run-down three-bed house once home to Dr Fergus O’Herlihy the medical superintendent for Cherry Orchard Hospital. Following his death, the house became derelict and stayed as such until it was opened up as a drug-treatment clinic in May 1992.  On its first day it treated ninety drug addicts for addiction and related diseases. At its height, the clinic treated 300 patients a day and had a year-long waiting list.”

A dedicated team was put together by Dr Mary Scully – working tirelessly to treat patients despite the challenging working conditions which included the constant threat of violence and transmissible diseases.

At the celebration, current and former staff members gathered to share tales of the “mad days of the clinic.”

Absent team members were counsellor Sile Heffernan, and Jim Doyle who was the area operations manager.

The sole remaining general assistant John Betts, aka ‘Mr Aisling’, was on holidays.

Dr Troy concluded: “The true success of the clinics work is reflected in the fact that there has been no new diagnosis of HIV in recent years, patients no longer die from the related infections and the plague has been stalled. It was a job well done.”