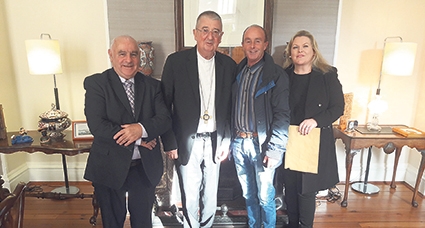 Survivors of baby homes seek apology from the Catholic Church

Survivors of Mother and Baby Homes reported a positive meeting with Archbishop Diarmuid Martin when they met him this month his Drumcondra home.

David Kinsella, who was born in St Patrick’s Mother and Baby Home, Clodagh Malone, who gave birth in St Patrick’s, and Tony Kelly, who spent the first 16 years of his life in foster homes and two institutions, attended the meeting.

“It was a symbolic meeting of three institutionalised survivors,” said Mr Kinsella.

“Our personal stories were well received by the Archbishop. We are now living day-to-day at the moment waiting for the forthcoming Commissioorn of Investigation conclusion and final report into Mother and Baby homes by Judge Yvonne Murphy and the Commission.

“The time has to be soon for a full unequivocal apology from the Catholic Church and most preferably before the Pope’s upcoming visit to Dublin in 2018. Also of concern was the ongoing refusal of survivor’s past records, including our original baptismal certificates, from the clergy offices and HSE.”

The three survivors have been in touch with Minister for Children Katherine Zappone’s office, with a view to setting up another meeting with survivors and the Archbishop prior to the conclusion of the commission’s findings.

“We will be asking for the inclusion of an apology to include the Children of Magdalene’s,” said Mr Kinsella.

“In response to Clodagh Malone’s and Tony Kelly’s questions regarding our rights to historical records from the institutions and our original baptismal certificates, the Archbishop assured us of the still ongoing talks between HSE and clergy in this matter.

Mr Kelly said: “The meeting finished on a very positive note with Archbishop Martin saying that he would like to hear from more survivors, and he requested that we arrange a meeting with around 30 survivors, perhaps if possible in conjunction with Minister Zappone also attending.