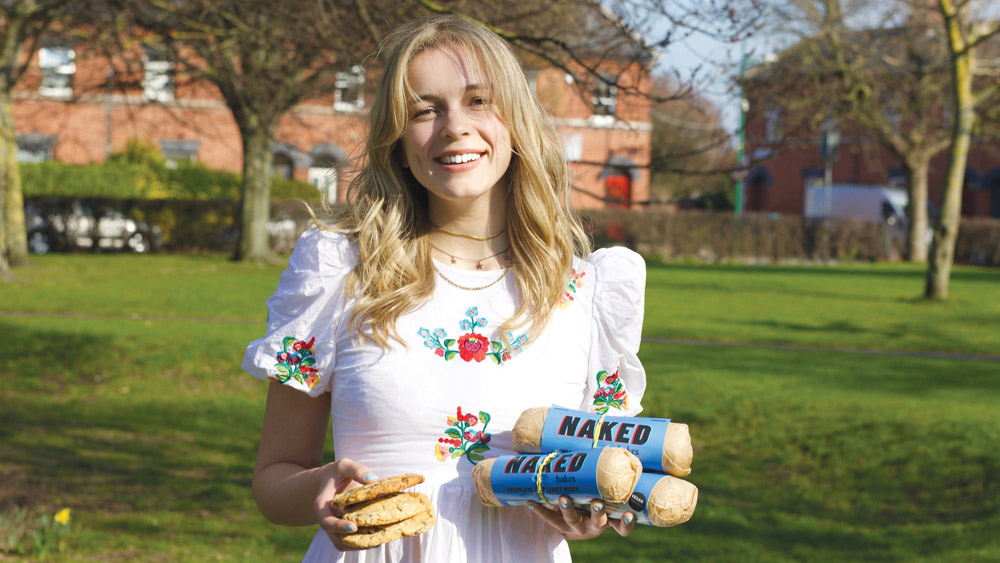 Aisling Tuck employs 10 people in the industrial kitchen in Killinarden

WHEN Aisling Tuck started baking vegan brownies and cookies in her parents’ kitchen in 2017, she set in motion the development of a successful business which now employs a staff of ten.

Now aged 26 and the founder of the Oh Happy Treats vegan bakery, Aisling became vegan when she was 15 and at this stage began familiarising herself with vegan baking and cooking.

At 19, Aisling moved to the Australian city of Sydney to work as an au pair and during her time there she sampled the many different vegan foods on offer in the city’s cafes and restaurants.

She then went travelling through Asia, where she continued to enjoy the vegan fare that the continent had to offer, before returning home to work in hospitality and noticing a gap in the market.

“When I came back to Dublin, I worked in hospitality,” Aisling explained. “I started baking in 2017 when I noticed a gap in the market for vegan treats.”

It was at this stage that Aisling developed her business, called Oh Happy Treats, where she utilised social media for her initial orders alongside working in hospitality.

“I started really low-key selling on social media, and I kept doing that, and then the treats started getting stocked in a café,” she said.

“For the first two years, it was mainly me doing it on my own. For the first year and a bit, I had a job in a café, but I wasn’t seriously selling.”

After the first two years, however, Aisling renewed her focus on the development of Oh Happy Treats and began renting an industrial kitchen space to keep up with the increase in orders.

Reflecting on the rise of interest in vegan products in recent years, Aisling said Oh Happy Treats are for all to enjoy – whether they follow a vegan diet or not.

“The USP of the business is that we’re vegan,” she said, “but at the same time, my standpoint is that I am vegan and I really believe in it, but I don’t try to preach or convert anyone.

“I just want to make food that speaks for itself.”

Aisling said that she’s received positive feedback from both vegan and non-vegan customers, who have told her that her bakery treats are as tasty as their dairy equivalent.

The business has gone from strength to strength over the years, to the point where it’s now producing upwards of 5,000 items a week in their industrial kitchen in Killinarden.

While Oh Happy Treats continues to grow, providing happy customers with tasty vegan cookies, brownies, and nut-free and gluten-free pastries, Aisling recently decided to set up a sister brand called Naked Bakes for her plant-based cookie dough product of the same name, which is now stocked in SuperValu.

When asked if she imagined her business would grow to the extent it has when she began baking in her parents’ kitchen, Aisling said it was a dream of hers that she wasn’t sure she would realise.

“It’s probably my dream, but when I started selling on social media I lacked the confidence to see that this could happen,” Aisling added.

“Sometimes I do have to take a step back and be like, ‘Wow, I’ve ten people working for me’, but it’s very fulfilling and motivating to know that I’m responsible for their livelihoods.

“I’ve had a few ‘pinch me’ moments, but I feel like I’m just at the beginning of this journey.”

As for where she hopes her journey as the founder of Oh Happy Treats and Naked Bakes will take her, Aisling said she has a number of plans for the two brands.

“I really want to keep going with the two brands, getting into more stockists and improving our website offering,” said Aisling.

“I’d like to open a brick-and-mortar bakery and have a bakery that people can come into. I’d also like to start exporting with Naked Bakes and get the product into more territories.”

While Aisling acknowledged that some non-vegans might be reluctant to try vegan food, she has some sage advice for anyone considering purchasing from Oh Happy Treats.

“You might surprise yourself,” she said. “It’s always a good day to try something new – you won’t be disappointed.”

For more information, visit the Oh Happy Treats website, where treat boxes are available for purchase.

NEWER POSTKCR House pub on the market with guide price of €1.75 million
OLDER POSTConvicted murderers can attack the staff in prison with impunity