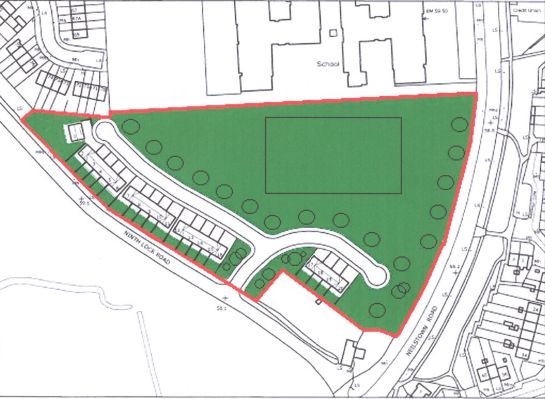 A CALL to reduce the number of housing units proposed for an infill housing development at Letts Field in Neilstown has been made following the part 8 public consultation process, with new proposals set to be brought to council members in the coming weeks.
A submission by Sinn Fein cllrs Eoin Ó Broin and Jonathan Graham presented an alternative proposal of 15 to 20 houses along the south end of the field, with space left on the field to create a full size football pitch on the field that can be used by the local community and schools.

They also propose that the development does not impact on existing mature trees on the field, and that developers should avoid locating housing along the boundary wall with St Peter Apostles junior and senior school.
Cllr Ó Broin said: “Last month we submitted a detailed opinion on the proposal to the council. In our view the development as proposed is too big. We have submitted an alternative proposal for between 15 and 20 houses in the same location.
“Our proposal would ensure that the local community and schools do no lose the existing football pitch on Letts Field and the special autism unit in St Peter Apostles Junior School is not disturbed by any new development.
“However we have also proposed the any houses lost from the original Letts field proposal should be provided for at other locations in Clondalkin so that the total number of new council houses remains the same.”
The currently proposed plans for Letts Field include 18 four person homes, 25 five person homes, four six person homes and one specially adapted dormer unit to be constructed on the site.
As previously reported in The Echo, local residents in Moorefield and Woodavens primarily opposed the council proposal and supported a smaller development for the area, along with provision for a play space as part of the development.

Latest news: Youths try to lure Garda patrol cars ‘to stone us out of it’…

Latest news: Charges to be brought over Jobstown protest…