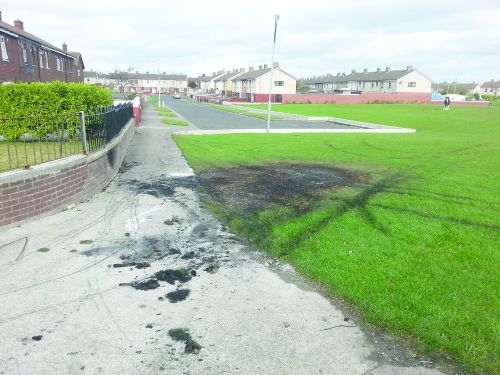 UP TO 70 bogus calls were made to gardai to “divert resources”during a weekend of carnage in Cherry Orchard last month.

Youths broke street lights to avoid CCTV detection, and tried to “lure patrol cars” into the area in order to attack them with stones, according to senior garda sources.

Booze fueled celebrations after a sulky race led to multiple anti-social incidents over the weekend – culminating in a vacant house on Croftwood Gardens being vandalised on the Monday night.

Neighbours attempted to protect the property and local councillors tried in vain to get gardai to the scene, before back up was eventually provided to a council crew sent in to secure the property.

At the recent Joint Policing Meeting in Ballyfermot, Superintendent Brendan Connolly from Clondalkin Garda Station, responded to concerns by residents, with regard to the lack of a garda response over the weekend.

Supt Connolly said residents were “100 per cent right” and “90 per cent of the area was good”, but that he had a “finite amount of resources on any given night.”

“We had to deal with between 60-70 false calls, the purpose of which was to lure us in to stone us out of it,” said Supt Connolly.

He continued: “Street lights were broken to avoid detection by CCTV and entice guards in. Quite a number of vehicles were stoned – fortunately no gardai were injured. Dublin Fire Brigade were stoned.

“There has been an increase in anti-social behaviour by large groups and that sponges up a large part of garda time and resources. We try to resolve things. For a short period it is okay and then it kicks off again.”

Gardai in Ballyfermot have to deal with problems in other parts of the city at any give time, leading to calls by local representatives for additional resources to be designated for the area.

Area Manager Tony Flynn said the council “are acutely aware of issues” in the area and that he is raising the matter “with the highest levels of the city council.”

Latest news: Charges to be brought over Jobstown protest