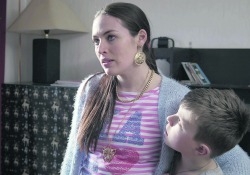 Amy from Tallaght is best known for her roles in
‘A Mother’s Love’, ‘Yarn’, ‘Requiem For The Lost’ and ‘The Beauty Queen of Leenane’.
Leo from Walkinstown plays Ned Jenkins who is left home alone by his mother Joanna who is played by Amy. Ned gets hungry and tries to make himself some burgers and nearly sets the house on fire. The gardai arrive at the scene and call child welfare when they see that Ned was left home alone. The Gardai later attempt to arrest Joanna and she locks herself and her son into a room in the house leading to a stand-off situation.
Speaking to The Echo, Amy said: “I had a fantastic time filming with the cast and crew who were so kind, welcoming and helpful to me. I thoroughly enjoyed working on such a professional and fast paced production and feel I gained great experience as an actor, working with such talented and professional cast and crew and would love to work on ‘Red Rock’ again, hopefully there’s more of Joanna Jenkins to come.”
“Red Rock” is Leo’s first ever role and he is really excited about it. Leo has been with Mary Murray Visions Drama School for the last two years and loves it. The school is headed up by former Love/Hate actress Mary Murray, famed for playing Janet in the hit show.
Leo said he really enjoyed the experience of working with the other actors and producers on ‘Red Rock’.
He added: “ It was great fun and they were all very nice to me especially Emily and Tara in wardrobe and make up. I loved being on the set and the Director let me shout “Ok people take 5” on the last day! That was great.”
‘Red Rock’ airs every Wednesday and Thursday at 8.30pm on TV3.