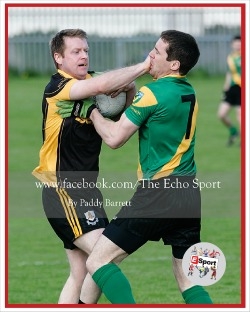 In this week’s Echo Sport we have more news than Messi, Neymar and Suarez have goals, and that’s because May madness is in full swing. Despite

many of the DDSL Finals being rescheduled because of bad weather last week it was still a packed weekend of soccer, and we have all the action from several crucial games. Martin Loughran’s Crumlin United took on Bluebell in the Charlie Cahill Cup Final, and it certainly acted as good preparation for their upcoming Intermediate Cup Final showdown with Tolka Rovers this coming Sunday.

Elsewhere, the Dublin Senior, Intermediate and Junior Football Championship season kicked off, and we feature reports from the Inter clash between St Mark’s and Thomas Davis and the Junior C Ballyfermot derby between Liffey Gaels and Ballyfermot De La Salle. The evergreen Joe McNally was on the scoresheet for St Annes’ Juniors and we have all the news from that game, while Ballyboden’s U16s win in their Championship A semi-final also features.Clondalkin side SCV were out to complete a league and cup double when they clashed with Tolka Celtic in the Haroldville Cup, and we have all the action from that game, while there is also coverage of St Francis’ U15 Cup clash with St Kevin’s Boys, and all the news on Crumlin’s U12s who faced off against Belvedere. The Crumlin youngsters will be in action again this weekend and we would like to take this opportunity to wish Paul Webb, his management team, and all the players the very best of luck in their SFAI Cup Final against St Kevin’s Boys on Saturday in the Golden Ball.

Away from the round ball games, Tallaght Swimming Club’s Antoinette Neamt and Clondalkin Swimming Club’s Brian Sweeney were rewarded for their success in 2014 at the annual Swim Ireland Awards, and we speak to Brian about his success, while news of well-known former cyclist Mel Sutcliffe’s sponsorship of the Junior Tour of Ireland, which has rescued the competition, also features. In motorsport, Aron Smith was in action in the British Touring Car Championship at the weekend, and there’s news from that event, while 10-year-old Clondalkin native Alyx Coby’s rise to stardom in the Motorsport Ireland Cadet Karting Championship makes for great reading.

As always there is plenty of martial arts news, most notably the recent success of Red Rhino Kickboxing’s James McGuirk who won two goal medals at

the ISKA World Kickboxing Championships in Portugal, and Karyna Nikitina’s success in the Munster Open, while there are plenty of other snippets from across a multitude of sports. If we’ve missed anything this week then get in touch with us via sport@echo.ie. This coming weekend promises to be another bumper one for sport with more than 25 local clubs taking part in soccer finals across the DDSL, SDFL, LSL and LFL, and we’ll have all the news in next week’s edition. If you’re at an event or if your club or team have some news then get in touch, or better still, find us on Facebook @ https://www.facebook.com/TheEchoSport