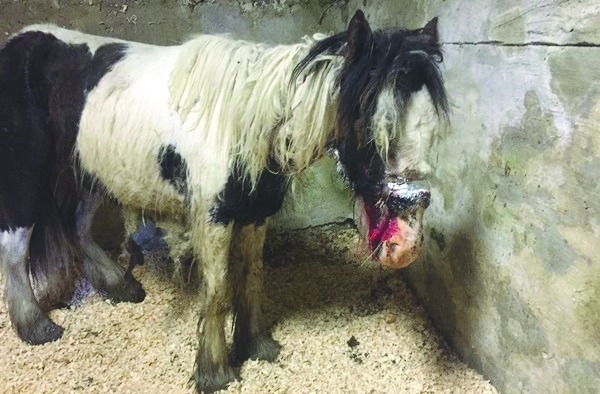 Appeal from horse charity after rescue of piebald

VOLUNTEER organisation My Lovely Horse are appealing for donations for a horse they rescued in sickening circumstances in Clondalkin last month.

The piebald cob was left with a head collar on him at a few months old. As he grew, the head collar tightened, causing much pain, damage reached bone and neck, leading to a live maggot infestation on his face.

In April, the not-for-profit group responded to a call from the public about a horse with an embedded collar, who was running wild in a field in Fonthill, of over 100 acres, with many other horses.

Volunteers tried to catch him unsuccessfully and contacted many organisations for help – the one person who got back to them was Gerry Creighton, from Dublin Zoo.

With Gerry and his tranquilliser gun, a vet, and a team of volunteers, the group tried to corral and tranquilise the horse on three separate occasions, but the pony kept on running.

After four attempts, they finally got him sedated on May 26, and straight to their rescue centre.

A vet removed the old embedded head collar, treated the wound and Gerry is expected to make a full recovery with lots of veterinary care, and care from MLH volunteers.

MLH thanked Gerry Creighton from Dublin Zoo and named the rescued piebald cob after his hero.

To make a donation for Gerry’s treatment, visit the sponsor section of www.mylovelyhorserescue.com.

They also accept donations via PayPal on donate@mylovelyhorserescue.com, or cheque of postal order.