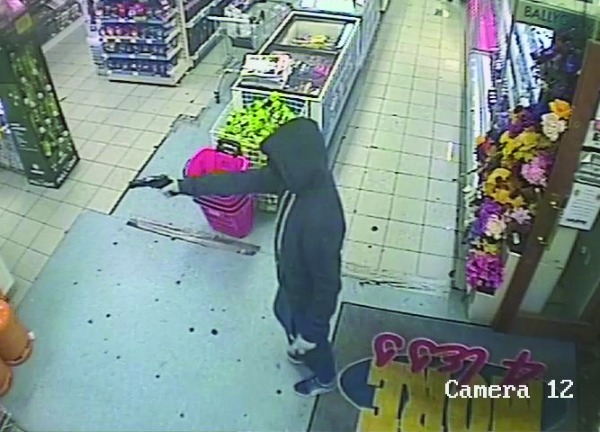 BUSINESSES at a small shopping centre are appealing for the community to “take a stand” against a sinister gang of young thugs.

A masked gunman staged an armed robbery at the More4Less Food store in Bawnogue shopping centre, Clondalkin, twice in the space of three days this week – frightening staff and making off with a small amount of cash.

Employees believe the same man was involved in both incidents on Friday (April 1) and Sunday (April 3).

The raider operated solo on Friday, but brought an accomplice for his second robbery on Sunday at 1.44pm, during which, a gun was momentarily pointed at a terrified 10-year-old boy.

The pair took off with a small amount of cash, heading on foot towards Alpine Heights.

The attacks follow multiple robberies of businesses at the shopping centre in recent months, along with a long-standing problem of intimidation, theft, and anti-social behavior by a gang of local thugs.

“The majority of people in Bawnogue are good, but we want the community to take a stand,” said a More4Less employee, who cited another armed robbery at the store on February 24.

He continued: “Pointing a gun at the boy really hit me. He was looking at toys on the shelf when the guy came in and brandished the gun around, but what if the gun goes off?”

“There’s a lot of kids, around 20-30 of them, hanging out outside, intimidating staff, throwing eggs in, trying to pull the shutters down. It’s got progressively worse. You can’t turn your back for a moment or they’re in, and it’s not even like they want to steal, but just to cause damage.”

Regularly, a staff member has to be present at the front door of the shop to prevent youths wreaking havoc – while at night everything in the courtyard has to be locked down to prevent it being destroyed.

Youths try to get a rise out of staff members, insulting them with childish taunts and aggressive threats, but this has implications for the business.

“We had to convince the owner that this shop is worth keeping,” said an employee.

“From a business point of view, it’s giving us added expenses, replacing tills, damaged goods, we are looking at getting in security. We get threats when we stand up to trouble, but what are we supposed to do, let them come in and wreck the shop, scare our staff and customers?

He continued: “The girl behind the counter for the last armed robbery was only 19. It’s not on. You can’t feel comfortable at work, if you think you are going to be robbed. We are asking the community to stand by us. If you see something bad happening, don’t do nothing about it.”

Other businesses that The Echo spoke to in Bawnogue Shopping Centre, either confirmed recent robberies at their premises, or were afraid to comment due to the culture of fear perpetuated by thugs.

Clondalkin Gardaí have facilitated a business watch meeting for retailers in Bawnogue, Greenpark, Woodford and Kingswood shopping centres, at the Green Isle Hotel, on April 13.

A Garda spokesman said: “Gardaí are investigating an incident in which a lone male, entered a Bawnogue shop on April 1 before 8pm. He is believed to be in possession of a black hand-gun. He threatened staff, and left with a small amount of cash. No injuries reported.

“On April 3, a similar incident, occurred. This time two males entered the premises, one in possession of a black hand-gun and the other male had a long kitchen knife. Again, staff were threatened, and they left with a small amount of cash, and fled on foot in the direction of Alpine Heights.”

Anyone with information is encouraged to contact Clondalkin Garda Station at 666 7600.

The owner of More4Less has submitted a planning application with South Dublin County Council to refurbish the store – amalgamating three retail units into a small supermarket, including the existing separate post office.