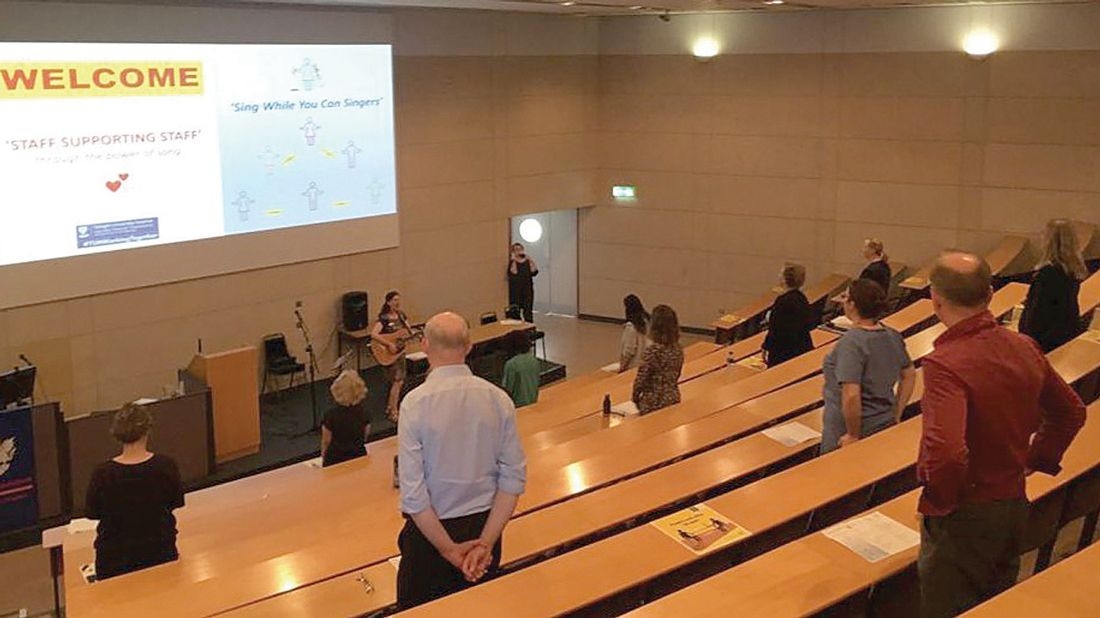 TALLAGHT University Hospital has continued to encourage and support the arts throughout the Covid-19 crisis – providing patients and staff with a creative space to help take their mind off the challenges and worries faced.

Despite the crisis in healthcare, space was still made in the daily life of Tallaght University Hospital (TUH) for the arts, and the therapeutic and calming impact it has for all.

TUH has a longstanding Arts and Music Programme, which was continued and adapted in the face of coronavirus.

According to Ali Baker Kerrigan, Arts Officer at TUH, the arts team redesigned a number of activities that could be rolled out quickly to maintain a level of art and music programmes for the health and wellbeing of patients and staff.

Speaking with The Echo, Ali said: “Research and evaluation has proven the benefits of arts in health so we were in no doubt that arts was important to focus on.

“When the Covid-19 pandemic began there was an understandable reaction of stress, anxiety and worry, the arts had the potential to help relieve some of those factors for patients even if only for short periods of time.

“With visiting restrictions in place there was an element of boredom for patients so it was important to offer activities that could provide interest and enjoyment.”

One of the first initiatives introduced for patients was a series of arts packs for patients called ARTS4ALL, which included activities from colouring to weaving and crafting to sewing – catering for all levels and abilities.

Another initiative was Sing with Me, a serious of acoustic music videos performed by Clara Monahan, a music therapist in TUH’s age related service.

The videos were accessible on the hospital’s Youtube channel or website, with staff and patients invited to take some time out by listening in, singing or tapping along to a selection of feel-good tunes.

A second series of videos called Relax with Me was also produced, and contained music-inspired relaxation and visualisation videos guided by Clara.

According to the arts team, the music-inspired videos offer an opportunity for patients and staff to “relax, recharge and revive”.

Another singing troupe within the hospital is The Sing While You Can Singers.

An example of one of the art packs, before and after

Formed in 2019 between the arts department and pastoral care team, this casual group of singers is made up of a wide cross section of TUH staff, under the musical direction of Clara Monahan.

Since lockdown, the group has performed twice while adhering to social distancing guidelines, and together performed Lean on Me in support of their peers.

The Gaslamp Gallery in Gorey also lent TUH a number of prints to hang within the Rest and Reconnect rooms for staff, while the Leinster String Quarter performed for patients and staff on May 16.

Looking back on the past three months, Ali said: “I believe the arts supported patients and staff through the last three months by designing and offering many different creative formats.

“The pandemic presented a new set of challenges for delivering the arts programme, a learning curve that we will more than likely continue to explore and develop.”

Ali has been based at TUH since 2013, starting out as an arts volunteer in the National Centre for Arts and Health, moving into the role of Arts Co-ordinator in 2015 and Arts Officer in 2017.

“Thankfully we have received many comments from patient’s stating their own belief that the arts have assisted in their recovery and wellbeing”, Ali said.

The creative efforts made by the team at Tallaght to care for the wellbeing of each other and their patients is admirable, and shows true empathy during an unprecedented crisis.

Visit www.tuh.ie for more or visit the hospital’s Youtube channel.