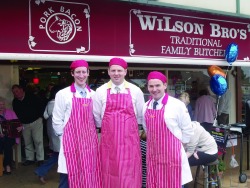 REMAINING at the cutting edge of butchery for 42 years has seen Wilson’s Family Butchers embrace changing tastes, but not at the expense of tradition and quality.
More than 42 years ago, four Firhouse brothers, Myles, Tom, Harry and John, opened a butchers shop in Tallaght – and is still serving its customers quality from its shop in the Dominic’s Shopping Centre.
Two years after opening, in 1975, the brothers opened their second butchers shop in the Rathfarnham Shopping Centre – where, on Saturday, they hosted a 40th anniversary barbecue for their customers.
Over the years, three of the brothers’ sons have also joined the business and are second generation Wilsons behind the counter – resulting in the traditional butchers employing seven family members on top of an additional 20 employees.
Derek Wilson, John’s son, told The Echo: “All of our stock is produced in-store and we make our own sausages and pudding, cure our own rashers, marinate our own meats and our chicken products are breaded fresh by one of the founding members’ sons.
“It’s all about quality for us and that hasn’t changed over the years, we are still a traditional butchers but we have introduced new meats such as barbecue produce which would not have been in the shop window 40 years ago – come to think of it, neither were chicken fillets.”
He added: “We have adapted to our customers’ changing tastes and needs and while it is very difficult for us to compete with the large discount stores on price, we can compete and deliver on quality – cheap doesn’t always mean good value.
“We have been working with the same suppliers for decades so, we stand over our products and are delighted that more than 40 years down the line we’re still delivering quality meat products to our customers – many of whom have been shopping with us for four decades.
“Alongside quality, customers also get a personal service and advice on how to prepare and cook products if need be – and a chat of course.”
Last Saturday, Wilson’s, which was recognised by the Craft Butchers of Ireland for its quality and traceability, threw a barbecue to mark its 40 years in Rathfarnham and treated customers to free food and family fun.
For further details on Wilsons, which has recently started an online order and delivery service, visit www.wilsonsbutchers.com – where a competition to win a barbecue will be starting soon.