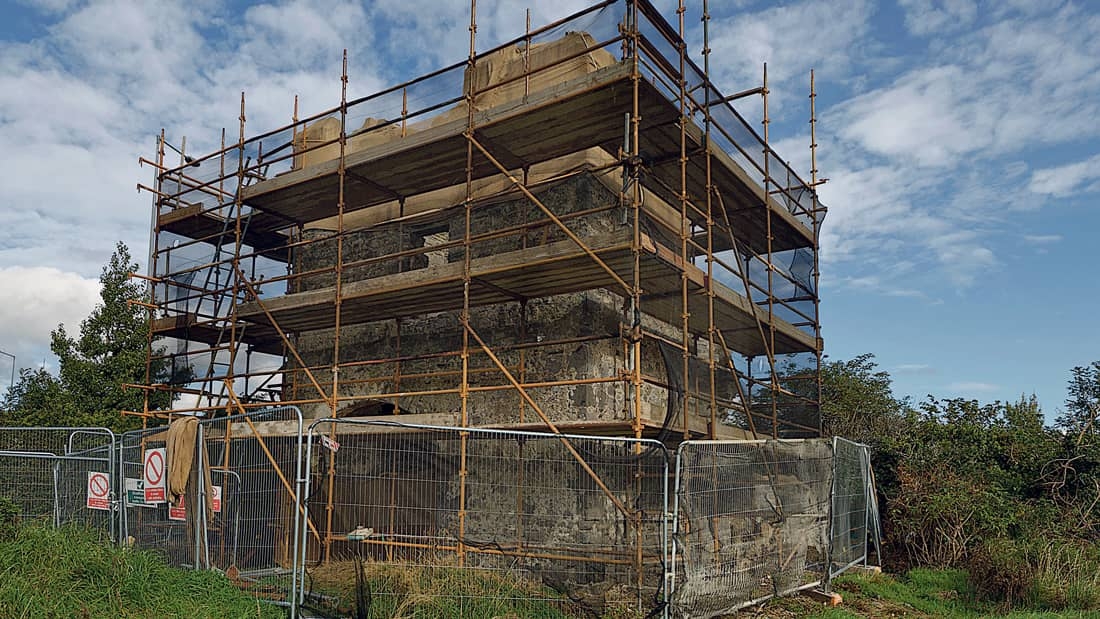 Ballymount Gatehouse being brought back to life

WORK on the Ballymount Gatehouse, at the site of what was Ballymount Castle, has commenced, with locals travelling on the Red Luas Line in prime position to watch as this protected structure is brought back to life.

Located between the M50 at Kingswood/Ballymount and the Kingswood and Red Cow Luas stops, Ballymount Gatehouse emerged from the overgrowth last year when its walls were freed of thick, creeping ivy and heavy vegetation.

Ballymount Castle is believed to have been constructed in 1622 by William Parsons, with the restoration of its gatehouse on the agenda of local groups and elected representatives for a number of years.

South Dublin County Council confirmed to The Echo that Ballymount Gatehouse is one of the Architectural Conservation Projects being undertaken this year for local authority owned protectured structures.

The project is being managed by the council’s Architectural Conservation Officer Ms Irenie McLoughlin under Land Use Planning and Transportation Departments projects – with Capital funds allocated.

In a comment to The Echo, Ms McLoughlin said: “Vegetation and site clearance were completed during 2019 as part of initial works in order that a full condition assessment and survey of the structure could be carried out by a consultant conservation engineer.

“A full scope of works for remedial repair/conservation works was prepared and specialist conservation contractors were engaged.”

Workers in Ballymount Gatehouse, at the site of what was Ballymount Castle (Image: Deputy Francis Noel Duffy)

Conservation works , which commenced in September, are expected to be completed by early November 2020.

“The support of Transdev and South Dublin County Council Public Realm have assisted in allowing this project as the site has provided a few logistical problems which were overcome”, Ms McLoughlin said.

“The conservation repairs are the priority works under the current project.

“However, once the Architectural Conservation works are complete the feasibility of lighting the structure and providing interpretation will be looked into, in collaboration with Public Realm Section of the council by way of possibly providing information boards within the parkland so that the Gatehouse can be viewed safely from the Parkland side of the Luas track.”

Dublin South West TD Francis Noel Duffy has been part of group calls for the conservation of the structure since he was a sitting councillor with South Dublin County Council.

Deputy Duffy (GP) was among a number of councillors calling for the conservation of Ballymount Gatehouse, alongside local residents and community groups.

Some eight years ago, the restoration of Ballymount Gatehouse was highlighted by Tallaght Community Council (TCC) while in 2015, local historian Ed Mooney expressed his sadness over the gatehouse being hidden “behind a thick blanket of bushes”.

Speaking with The Echo, Deputy Duffy said: “It took some time for us to get here.

“For people living in Tallaght, this is your history.

“It’s kind of like a family tree, it gives you a sense of where you’re from, a sense of place.”

Cllr Duffy, who spoke of his upbringing in Monaghan, stressed how places and structures connect people to their community, and their hometown’s heritage.

As a councillor in 2014, Deputy Duffy established the Architectural Conservation Forum which, sitting within the Planning SPC (Special Policy Committee) of South Dublin County Council, identified Ballymount Gatehouse as a conservation project.

Local residents and commuters traveling past on the Red Line Luas can keep an eye on conservation works and watch as this important piece of Tallaght history is restored and conserved for generations to come.