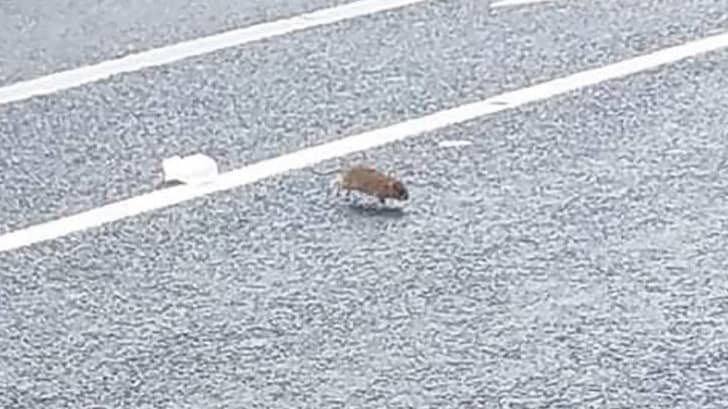 ISSUES with rat infestations in open spaces in Killinarden and near Tallaght Stadium have left one local resident feeling like she “can’t walk anywhere”.

As previously reported in The Echo, there has been a countywide problem with rat infestations since the lockdown began in March, with the HSE’s Pest Control Service making 5,440 rodent call-outs in South Dublin from January to June this year.

A rat running across the road in Killinarden

For Killinarden resident Claire Casey, the issue with rodents in the locality became apparent when lockdown began in March, as she and her young daughter saw a rat scurrying across a road in Killinarden Way.

This was the first of several rat sightings, and since then Ms Casey has seen the rodents in the greenspace near her house and emerging from bushes in Killinarden Way during local outdoor exercise classes.

Ms Casey then started walking in the vicinity of Tallaght Stadium instead where she also saw rats, and was alerted to a large infestation in the area on social media.

“I’m so petrified of them,” Ms Casey told The Echo. “We stopped walking around Killinarden Estate and started walking near the stadium, but then we saw pictures of clusters of rats there online.

The open spaces where the rats can be seen

“[In one] area of bushes [in Killinarden], on several occasions we have seen anywhere from 10 to 20 rats at any one time, and this is during the day.

“It is becoming a daily occurrence when driving or walking, seeing one or more.

“In fact, since lockdown we have moved our ladies’ training group to outside one of our homes, and only last week while training at 6pm in broad daylight a rat ran from the bushes opposite and down the storm drain.

“I think now that something drastic needs to be done about it.”

Ms Casey said she notified South Dublin County Council about the influx of rats when lockdown began, but she said the problem is now “getting out of control”.

Louise Dunne, a Sinn Féin councillor for Tallaght South, said several Killinarden residents have contacted her about the issue since lockdown began.

“It’s been a huge issue in the area,” Cllr Dunne told The Echo. “Particularly around lockdown, I got numerous calls and have been on to the council to raise the issue.

“During lockdown, there was some good weather but some people couldn’t let their children out into their gardens [because of rat infestations].

“The council said that this seems to be an issue right across Dublin, because of the increase in human traffic.”

Cllr Dunne said she lodged a submission to the council on Monday, requesting that the bushes in Killinarden, where the rats appear to be gathering, be removed.

A council spokesperson told The Echo: “The council has investigated sightings of rats in the Whitestown Way and Sean Walsh Park vicinity.

“A pest control contractor has been engaged and the areas are being treated.

“Additional treatment will be applied as necessary.

“The Killinarden open spaces will be inspected and if evidence of rats are discovered the council will remove any litter which could be providing a food source for rats and issue an order to treat the area with pest control or/ and removal of vegetation.”