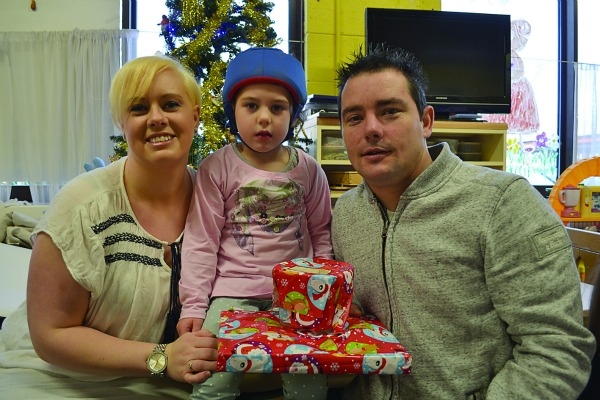 THE family of a brave Tallaght four-year-old, who is battling a rare and incurable brain disorder called Battens Disease, is looking forward to celebrating a special Christmas this year following a visit from Santa Claus at her pre-school in Kilnamanagh.

Courageous Abbey McGuinness, who attends the Early Steps pre-school in St Kevin’s Boys School with her sister Kyra (3), was diagnosed with the fatal disease back in May.

Abbey’s story was featured in The Echo in September, and since then she has seen support from some of Ireland’s biggest superstars in UFC champion Conor McGregor and the cast of Mrs Brown’s Boys.

Battens disease will see Abbey lose her motor skills and sight and eventually end up bed-bound on a feeding tube, with doctors unable to tell the family how long she will survive – Battens disease in young children usually progresses rapid-ly and sees the child live up to between the ages of six and 12.

Abbey’s mother Linda spoke to The Echo about her daughter’s fighting spirit and how much the family is looking forward to Christmas this year.

She said: “Abbey knows about Santa, she knows that ‘ho ho ho!’ means Santa and that he brings presents to children.

“She loves the Christmas tree and we’re all looking forward to Christmas this year, and the visit from Santa at her pre-school.”

As one of only three children in Ireland that has the neuro-degenerative disorder, Abbey continues to fight it every day with the support of her parents Linda and John and younger sister Kyra, with whom she is very close.

Linda said: “Kyra is so good, she’s always helping Abbey. They’re both very happy in the pre-school and Kyra really knows how to communicate for Abbey with the teachers in school.”

Abbey first showed serious signs of Battens Disease just after Christmas last year when she began to fall and have seizures, with an initial diagnosis of epilepsy.

Linda said: “Abbey always had issues with her speech and balance, but on December 29 last year she kept falling, so we took her for tests.

“She’s so resilient. She doesn’t even realise what’s going on, she has no concept. She now has a hat which she wears all the time for when she falls and has seizures.

“It’s such a rare disease – there are probably a lot more kids around the country who haven’t been diagnosed with it as it can be mistaken for autism or a speech delay, so we want to raise awareness and remove the stigma around it.

“John’s cousin passed away from it over 30 years ago, and there are so many families who have lost their children to the disease, including Tony and Mary Heffernan who set up Bumbleance.

“We’ve had great support from these families and great insight into what to expect, as they’ve been through the experience with their child as well.”

More information about Battens Disease can be found online at Bee for Battens (beeforbattens.org), the Irish campaign to help raise awareness of Battens Disease.

Support for Abbey and her family can be given on the Abbey’s Army Facebook page, which is updated regularly.