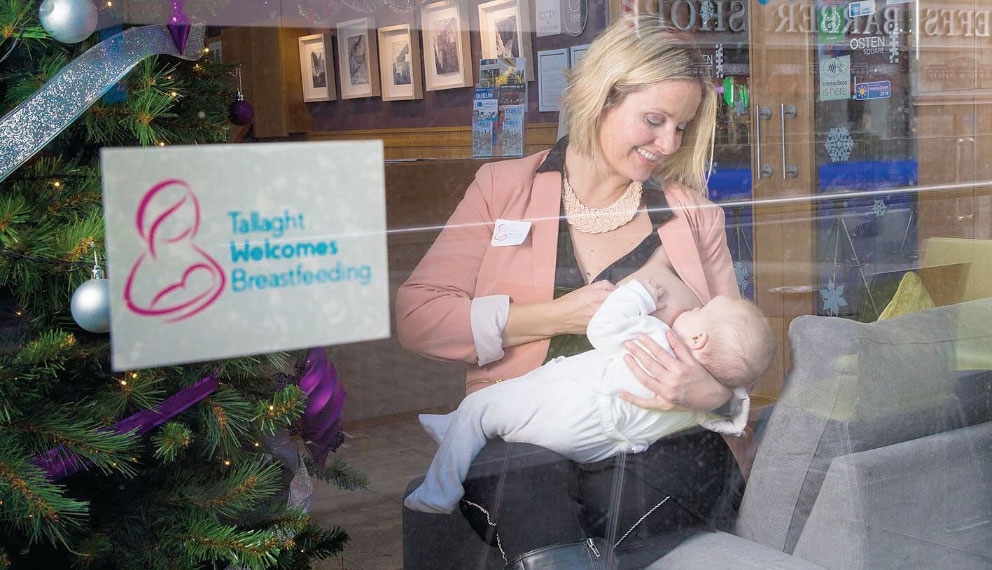 A BREASTFEEDING initiative is being rolled out in Tallaght, after recent statistics showed that breastfeeding uptake rates across the capital are amongst the lowest in Dublin South West.

The Tallaght Welcomes Breastfeeding initiative was officially launched on Wednesday, November 28, by journalist and breastfeeding advocate Siobhan O’Connor who encouraged uptake from mothers – and also asked for the community to back breastfeeding in public places.

Led by the Tallaght West Childhood Development Initiative (CDI), the project is being rolled out following figures released earlier this year by the HSE – which showed a “stark” difference in rates across Dublin.

Rates are among the lowest at 48 per cent in Dublin South West – which includes the Tallaght area.

“We need to support women and empower them to have the confidence to breastfeed everywhere,” journalist Siobhan O’Connor said.

“I breastfeed just about everywhere, from cafes, to buses, to park benches in summer time.

“The more breastfeeding is encouraged in public places, the more it will be considered the norm.”

‘We need to teach all children in secondary school’

She added: “We need to teach all children in secondary school, male and female, about the benefits so that they have the facts and thereby normalise what is one of the most natural things we do as mothers.”

As part of the drive, according to CDI, community settings and local organisations are being asked to display a Tallaght Welcomes Breastfeeding sticker to “assure mothers that they are welcome to breastfeed in that location and can feel comfortable in doing so”.

Commenting on the health benefits of breastfeeding, CDI parenting specialist Elaine Fagan said: “It reduces the risk of babies getting colds, infections and disease and strengthens mother and baby bonding.

“Breastfeeding support is most effective when provided by both professionals and peers, with community peer support particularly helpful in changing attitudes and normalising breastfeeding.”

Tallaght Welcomes Breastfeeding will also involve public information events, with the project seeking opportunities to speak to partners, grandparents and those in a wider community setting – such as schools, active retired, sports and youth clubs.

Coombe Hospital Midwife Megan Sheppard said: “We would particularly value opportunities to speak in secondary schools to young people who have not even thought about becoming parents, and for teachers to champion this programme.

“If their mothers have not breastfed, then young women are unlikely to be encouraged at home, so we need to talk directly to them.”

Anybody interested in engaging with the initiative or getting some free stickers are invited to contact CDI on 4940030 or visit www.twcdi.ie

NEWER POSTMother-of-two kicked in the head by former partner
OLDER POST‘You wear a smile . . . we thank you for each mile’