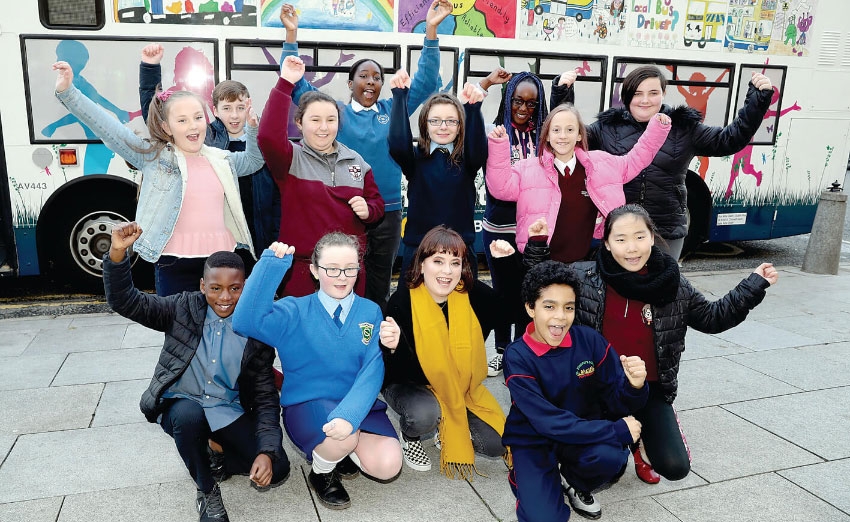 THE colourful creations of two Tallaght schoolchildren are being wrapped across a Dublin bus, after their art work – which was on display in the Hugh Lane Gallery – was chosen from 2,000 entries in a national competition.

For this year’s Dublin Bus Children’s Art Competition, young artists were asked to create a picture under the theme of ‘What I like about my local bus driver’.

In her winning piece of art, Ayse, who is in 5th class, wrote to her local bus driver “you drive us safely, you wear a smile, we want to thank you for each mile”.

While Margarita, who is in 6th class, described her local drivers as the “nicest”, as they spend their time “helping people travel and get home”.

Alongside being on display in the Hugh Lane Gallery and appearing in the Children’s Art Calendar 2018, both Ayse and Margarita’s pieces of art will be wrapped around a specially decorated Community Spirit Initiative bus.

Speaking about the announcement and reveal of the winning pictures illustrator, author and comedian, Aoife Dooley said: “I’ve always believed that it is important to nurture and encourage creative talent in children.

“I feel it makes a big difference not only to their artistic ability, but also for their self-confidence and belief in themselves as they grow up.

“It’s also fantastic that Dublin Bus is creatively using the Children’s Art Competition to show children that the bus not only helps to bring them to and from school, but also helps the lives of family, friends and neighbours living in their communities.”

The Children’s Art Competition is part of a Dublin Bus wider Community Spirit Initiative which “reflects the company’s commitment to playing an active role in the communities in which services operate”.

Susan O’Reilly, a 4th class student from St Canice’s Girls School in Finglas, was named the overall winner of the art competition.