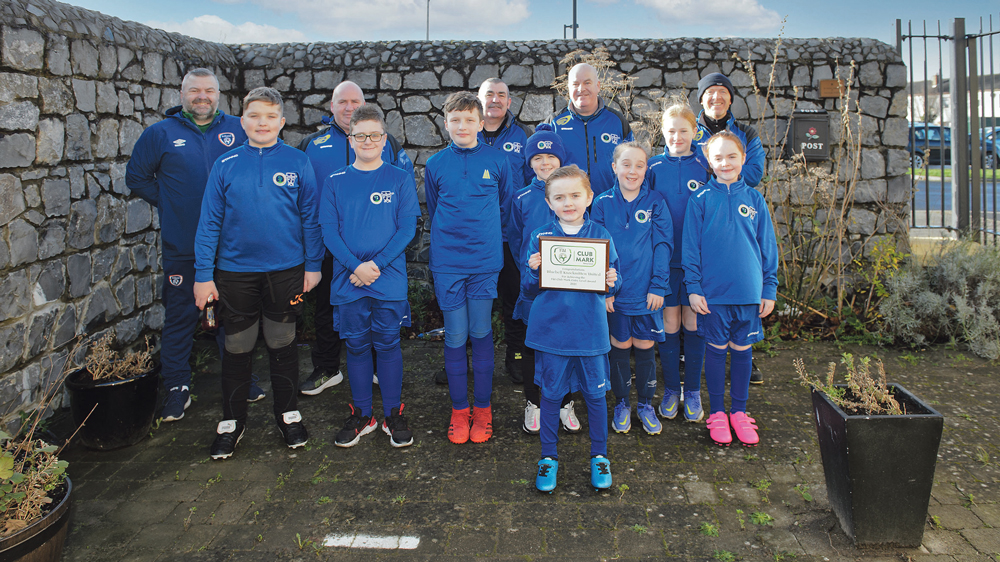 Bluebell Knockmitten’s Jimmy McGuirk, Robbie Decourcy, Sam Doran, Tony Kennedy and Paul Fenlon with some of the club players at the presentation of the FAI Club Mark Award. Photo by Paddy Barrett

BLUEBELL Knockmitten United FC has achieved the FAI Club Mark – an award presented to clubs in recognition of best practice in governance, management and administration.

On Saturday, the schoolboys/girls club, which caters for upwards of 200 children, was presented with the Entry Level Club Mark accolade.

As part of the Entry Level achievement, the club needed to reach certain criteria around ensuring all volunteers were both Garda Vetted and had undergone safeguarding procedures.

Bluebell Knockmitten assigned Sam Doran as its Club Mark Officer to oversee the administration side of the application procedure.

“It is a huge achievement for the club,” Doran told The Echo.

“At this stage, the club has been going so many years. We’re a community-based club and to get an achievement like this is massive.

“It’s nice to be able to show off the Club Mark to the community to show the work that’s being done.”

NEWER POSTKavanagh aiming to bounce back on Bellator 275 bill
OLDER POSTDancing With The Stars: Karen and John perform with their dance partners