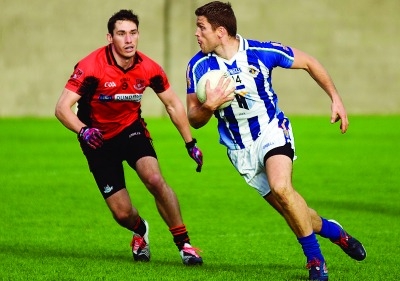 Boden on the brink of Senior C’ship success

IT’S ALL systems go for Ballyboden St Enda’s senior footballers as they square up to defending champions St Vincent’s in the Senior Football Championship Final.

The Firhouse Road side have done well to reach this stage of the competition which they last won back in 2009.

However they will have it all to do as they throw down the gauntlet to a St Vincent’s side looking to make it three Champion-ship titles in a row.

The Marino side have been the in-form side in Dublin club football and will go into this Sunday’s county final in Parnell Park as favourites.

But they have to stop an improving Ballyboden side that will be going all out to follow up on the point they made by way of their hard-fought win over St Oliver Plunkett’s/Eoghan Ruadh in the quarter-finals.

They made hard work of their win over Clontarf in the semi-final last weekend with late points from Andrew Kerin and David O’Callaghan seeing them into the final showdown.

Ballyboden have a well-balanced side with their defence including Stephen Hiney at full back along with Dara Nelson at centre back.

Former Dublin player Declan O’Mahoney has plenty of experience at this level and will prove crucial for Boden while Michael Darragh Macauley will pose problems for Vin’s.

Indeed Macauley was sent to the line last week after picking up a black card which saw Enda’s play the entire second half with 14 players.

The forward line is key for Enda’s with Conal Keaney (pictured above) starting at full forward flanked by Andrew Kerin and Colm Basquel.

It will be vital Boden get a good supply of ball into Keaney while Kerin and Basquel have the potential to register vital scores.

Sam Molony and Stephen O’Connor will have to raise a gear if Ballyboden are to secure the top prize while much will depend on the performance of key players Macauley, O’Mahoney, Nelson and Kerins.

St Vincent’s on the other hand have a wealth of experience and they will be looking to key forward Diarmuid Connolly for leadership.

Connolly has been in flying form for club and county and he scored five points against Na Fianna in the semi-final.

Ruairi Trainor is another player who will pose problems for Boden while former Dublin players Tomas Quinn and Ger Brennan have plenty of experience at this level.

NEWER POSTJude’s just one step away from the top prize in Dublin hurling
OLDER POSTKeep animals in a safe place this Halloween, warns DSPCA