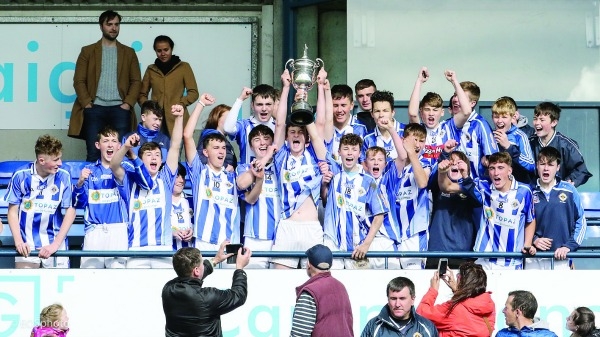 Boden Under 15 hurlers do the business

BALLYBODEN St Endas saw off St Vincents 3-15 to 2-13 in the Under 15 County Hurling Final in Parnell Park.

The Firhouse Road side got off to the brighter start with the help of some great frees from full forward Fergal Ryan. Ryan was also on hand to slot away a goal after five minutes.

The Marino outfit responded, however Enda’s got back into the game with a goal of their own.

The sides then traded goals before a great surging run from Malachy Codd found Tommy Farrelly out wide. He in turn passed to John McGuire in a more central position and he played a deft ball into Enda Cashman just outside the square, from where he slotted home.

The second half was a much cagier affair with very little quarter being given by ether side.

Numerous Vincent’s attacks were thwarted by the defiant Conor Lowe at full back.

Vincents did go on to record a second goal and produced some fine displays, most notably from Conor O’Brien at centre back.

With ten minutes to play, the Marino men had drawn level for the first time. Then came a three-minute spell from ’Boden which saw them score three points without reply.

It began with a free from the ever-dependable Ryan, followed by a long-range score from the stick of Enda Cashman. The third came as a result of yet another mazy run from ‘Man of the Match’ Malachy Codd.